Quirky Bike Shops: Pedaling Down Their Own Paths 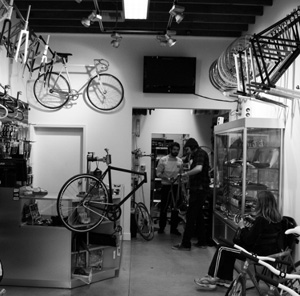 Don’t let its small size fool you. With frames for every price range and a knowledgeable staff of active riders, Long Beach Fixed Gear is the south-of-downtown headquarters for track bike culture. Started by a USC alum less than a year after his 2007 graduation, the specialty shop located on a block of galleries and clothing stores in Long Beach’s East Village Arts District has already become an integral part of the city’s fledging bike culture.

In addition to sponsoring a team of fixed gear prodigies – and being only a brisk ride away from the LA Velodrome – LBFG draws enthusiasts from all over the Great Basin to its movie premieres, races and events. Although its 475 square-foot storefront is much smaller than those of its niche counterparts, it makes up for the cozy space with a floor-to-ceiling bike wall, cases of colorful components and an e-commerce Web site. With endless options for custom-built cycles and an unpretentious approach to fixed gears, LBFG – the area’s only boutique bike shop – is fostering a much-needed community of urban cycling.

Steve Lubanski is the mad scientist Yoda of bicycles, and his giant warehouse in Pasadena is his muddy Dagobah lab. A one-man operation since its inception in 1987, Open Road Bicycles is a half-organized smattering of everything occupying Lubanski’s constantly working brain.

The foyer is a living room setup with leather chairs and a TV, the main room is a cavernous amusement park of varying bike types, a smaller side room is filled with protein bars and shakes and the back room showcases the largest retail selection of cycling apparel in the country (including two racks of vintage wool jerseys). The repair station is a heap of paperwork and Lubanski’s bike-themed prototypes, including the structurally-sound four-spoke wheel, the boltless front-loading “Dream Stem” and his claim to fame, a revolutionary clip-less riding system called the Side Mount pedal.

Although many of the items in the back room have lay untouched for years, Lubanski makes no apologies for the appearance of his shop. As both Open Road’s owner and sole employee, he has no interest in rotating inventory or eliminating cobwebs. He prefers to collect anything and everything bike-related – regardless of condition or value – and with everything from VHS tapes of old cycling races to the vintage tandem Peugeot lost underneath bike travel cases, the place resembles more a themed thrift store than a performance shop.

But for as much as Lubanski is unconcerned with aesthetics, he is brilliant about bikes. He imparts his extensive knowledge bluntly and without sales pitches, making his sage advice a refreshing change that’s worth the drive.

Bill’s Bike Shop isn’t a bike shop as much as it’s a repair stand on the sidewalk. And the man running the endeavor isn’t Bill, but Bill’s son, who turned a family burden into a lucrative moneymaker.

Bill bought the brick warehouse just west of USC’s campus more than 40 years ago and used it to house his car mechanic shop until he decided to close up and invest in multi-family properties instead. He didn’t sell the massive building, however, and instead used it as a deposit for bicycles and parts that he would find while cleaning out units in his apartment complexes.

But with no discernment for value or order, his collection quickly piled up – literally – until the decades of bike hoarding reached the front entrance and last year, the fire department threatened to condemn the place unless the stacks of mangled metal were taken care of. But instead of throwing out the thousands of bikes his father had amassed, Bill’s son immediately went to work, spending seven days a week at the storage locker, sorting through the ceiling-high forest of beach cruisers, children’s bikes, BMX, track and road frames and vintage townies.

Sometimes, he would put completed bikes outside on the busy Jefferson Boulevard sidewalk to get them out of the way while he was working and the sales made themselves. Although dents have been made to the gnarled piles of bikes in the six months since he started, there is still a long way to go. So while Bill’s son endlessly sorts through his father’s collection, he also sets up a repair stand, a tool kit and ride-ready bikes out front, operating a makeshift bike shop in his downtime from cleaning.