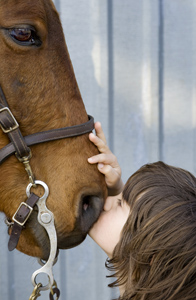 It’s a story you hear on the news late at night or see on YouTube and insist on sending to your friends. A boy is treated by Mongolian shamans and shows drastic improvements. The quick sound bites and footage of the beautiful landscape convey the story well enough to keep your interest for a few minutes before your virally incompetent attention span clicks its way somewhere else.

The Horse Boy is one such crazy, unbelievable, though totally fascinating story that is just as captivating as it is compelling. To tell such a fantastical story, director Michel Orion Scott was forced to relinquish much of the control that is taught in film school so that the story could tell itself.

“It’s like magic realism,” muses the passionate filmmaker. “How do you make a documentary that represents that much beauty and magic and incredible events? It was difficult to match the energy of the film to the incredible nature of the story. I learned a lot about letting the story tell itself organically.”

Rowan Isaacson is an enigmatic 5-year-old when he is not succumbing to fits of incontrollable tantrums and violent episodes. Diagnosed with autism at the tender age of 2, Rowan spends most of his days lost in his tormented mind. His dedicated parents, Rupert, a human rights worker and former horse trainer, and Kristin, a professor of psychology, have tried every form of orthodox therapy to no avail.

“They’re phenomenal,” says Scott about the parents. “They’re very, very dedicated to their child. I didn’t know, or really even believe, that Rowan was going to be healed from this trip. I was really following the dedication of the parents and the love they have for Rowan.”

And what a trip it has been. Having put his passion for horses on hold in the name of Rowan’s safety, Rupert cautiously introduced his son to Betsy, their neighbor’s temperamental mare.

Excuse the clichés, but a flip was switched, and the difference in his attitude was like night and day. Rowan began to lie calmly along the spine of the animal’s back, stroking her and, for the first time in years, talking rationally without the interruption of hysterics.

Encouraged by his son’s therapeutic relationship with the horse, Rupert began researching places where horses and healing came hand-in-hand. His search led him to Mongolia, where the horse was first domesticated and where shamanism is the state religion.

His plan was to go to Mongolia, ride horseback across the country and travel from tribe to tribe in search of healing powers for Rowan. From a director’s standpoint, filming in rural Mongolia without proper equipment, relying on horses to dolly him and the camera, was the biggest struggle.

What comes across the screen is miraculous to say the least. Throughout much of the trip, Rowan is uncooperative, even rejecting a horse for the first time to the discouragement of his eager parents. Taken out of his normal environment, Rowan is not affected by the healing countryside.

And then he meets with a shaman who does little – merely scraping off invisible toxins from the boy’s back. After the encounter, Rowan is a changed child, hardly crying, always playing, talking, reading, writing and, to his mother’s delight, using the bathroom like a big boy.

Mongolia did not cure Rowan of his autism. The film poignantly emphasizes that Rowan will always be autistic.

However, now that his temperament is under control, Rupert and Kristin are looking to encourage their son’s differences, to let him shine as the beautiful person he is. Even the director hopes that, through his film, the magic onscreen will promote tolerance from those who judge and categorize these people.

“We as a culture have a tendency to institutionalize or mold unique individuals to try and match our culture,” says Scott. “What I’ve learned from studying other cultures is that that’s not always necessary. They open a place for these individuals. When somebody was unique, they would ask, ‘How could we utilize what this person does well?’”

The Horse Boy is currently in select theaters.