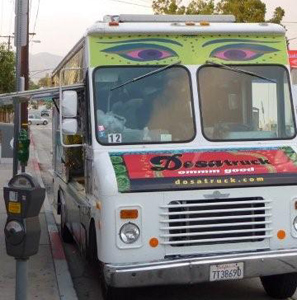 A food truck parked on the street.

Border Grill: The upscale Santa Monica eatery has gone mobile, and chefs Mary Sue Milliken and Susan Feniger – known by foodies as the Too Hot Tamales – are bringing their gourmet Mexican cuisine along for the ride. This top Twittering truck has been spotted everywhere from Downtown’s Art Walk to the West Hollywood Book Fair.

DOSAtruck: Los Angeles’ new DOSAtruck has been making the rounds about town since July. DOSA’s big seller is Mumbai Madness, a Masala dosa, which begins with a spongy, golden brown sourdough crepe that’s almost a hybrid of the delicate thin, French version and the yeasty pancakes that accompany Ethiopian food. Inside rests smashed curried potatoes studded with fragrant cumin seeds and a spicy crevice of tomato-coconut chutney that brings the kind of spicy heat that makes your nose run and your tongue tingle.

Other Dosas include a sweet potato Masala dosa and one stuffed with mushroom, spinach and cheese (all savory dosas $6). twitter.com/dosatruck —Sasha Perl-Raver

Franken’s: Raymond Groves is on a mission to give those ubiquitous bacon-wrapped hot dogs that smell so good when you’re stumbling out of a club at 2 a.m. a run for their money with his vegan hot dog stand, Franken’s. Founded in June 2008, Groves – a vegan musician who was frustrated with the lack of late-night snack options for non-meat eaters – reached out to clubs where he’d performed and soon started slinging dogs at the Smell in Downtown.

He can now be found at places like the Silent Movie Theatre on Fairfax serving up the Wolf ($3), a punchy chipotle-laced dog, and the Franken ($5), a surprisingly delicious Italian Sausage, spiked with sun-dried tomatoes and basil. Dirty Chips and Hansen Sodas run a buck each, and vegan cookies will set you back $2. Don’t forget to get down with the condiment stand featuring veganaise, sriracha, cilantro, pickles, jalapenos, onions, relish and sauerkraut. myspace.com/thefrankenstand —Sasha Perl-Raver

Green Truck on the Go: Feeding the hungry business people working off the 5700 block on Wilshire Boulevard, Green Truck on the Go creates an easy way to make the right choice. Not only do they use environmentally friendly cleaning products; the truck itself is recycled and runs on vegetable oil.

Even their food packaging containers are made from biodegradable products. Serving breakfast and lunch, the truck has a staff that is as friendly as they are efficient. greentruckonthego.com —Candice Winters

Once just a lonely cart, owner Sue Moore and her trailer can be found in Culver City across from Father’s Office in the Helms Bakery complex by day and outside of Silverlake Wine on Thursday nights. Their dogs are also served at the Golden State on Fairfax Avenue and can be bought by the four pack from the trailer. letsbefrankdogs.com —alli411

Tacos Perez: Though typically parked near the Ralph’s on Vermont Avenue and Adams Boulevard, Tacos Perez is loved and adored most by USC students up late with the munchies on party nights. The line can be long, but there are several perks to choosing this taco truck over the others.

First, the food is phenomenal. I recommend the chicken quesadilla, which somehow manages to revolutionize the chicken-cheese-tortilla plate. Inevitably, with a name like Tacos Perez, their tacos rock, too. Second, Tacos Perez now accepts debit and credit cards making it that much easier to splurge. —Candice Winters