Trojans Sleep, Bruins Quack Away in Second Half 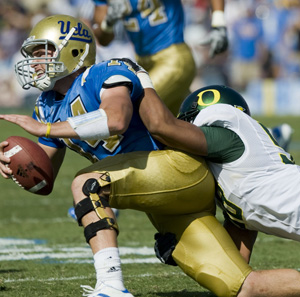 Owning a three-point lead at halftime does not mean much when the very first thing you allow to happen when you return to the field in the third quarter is a 100-yard kickoff return for a touchdown, ergo losing that precocious lead. Yet, that is exactly what happened at the Rose Bowl on Saturday, as the only football show in town last weekend failed to capitalize on a golden opportunity to topple a nationally ranked team, when UCLA’s team fell to No. 13 Oregon, 24-10.

Trailing 3-0 at halftime, the Ducks scored consecutive touchdowns in the first 26 seconds of the second half – a 100-yard kickoff return and a 32-yard interception return – to take a 14-3 lead. Bruin quarterback Kevin Prince returned to action after a three-week absence; however, the UCLA offense failed to score a touchdown (Sophomore linebacker Akeem Ayers scored the only Bruin touchdown, when he intercepted a pass in the end zone midway through the fourth quarter.).

Meanwhile, USC had Saturday off giving Trojan head coach Pete Carroll an opportunity to run his players through extra preparations for this weekend’s game against No. 25 Notre Dame in South Bend, Ind. It is the second consecutive away game against a ranked-opponent for the Trojans; Oct. 3, they defeated then 24th-ranked California, 30-3, at Berkeley.

This weekend, USC (4-1) comes into South Bend with Notre Dame (4-1) ranked 25th in both polls; Southern Cal is sixth in the AP Poll and fifth in the Coaches Poll.

The game figures to be an ultimate battle between the top two high school quarterbacks to come out of Southern California in the past five years, with Notre Dame’s Jimmy Clausen (of Oaks Christian) playing in what many consider the biggest game of his career against Mater Dei standout Matt Barkley. A Notre Dame win may bolster their chances at making a BCS bowl bid, while also seriously damaging Southern California’s national championship aspirations.