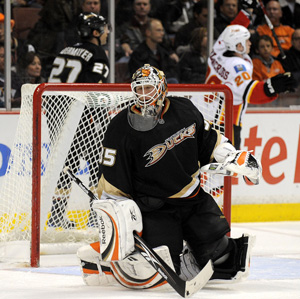 Keep shooting, and at some point, you will score. That was the mantra of the New York Rangers whose players continuously flicked their wrists at Madison Square Garden on Saturday against the Anaheim Ducks, almost all for naught. Yet, something had to give in the battle between Ranger players and Jean-Sebastien Giguere, and after deflecting shots left and right for 40-plus minutes, it was the Duck goalie that finally caved.

With the Rangers (4-1-0, eight points) attempting 20 more shots on goal than the Ducks (2-2-1, 5 points), it was actually quite impressive for both teams to enter the locker rooms at the second intermission with a scoreless tie, despite New York outshooting Anaheim, 24-12, in the first 40 minutes.

But just a little more than two minutes into the third period, Ales Kotalik finally found the back of the net behind Giguere, and the Rangers went on to defeat the Ducks, 3-0. New York won the shots on goal battle, 38-18, with Rangers goalie Steve Valiquette tending the net for a shutout.

Meanwhile, the Los Angeles Kings took the ice at Nassau Coliseum in nearby Long Island, looking to extend their winning streak on Monday afternoon against the New York Islanders. The Kings, indeed, made it four straight wins after losing their season opener to Phoenix, as Los Angeles (4-1-0, eight points) defeated New York, 2-1.

After a scoreless tie in the first period, where the Kings were outshot 11-4, Los Angeles picked up the pace in the second with 13 shots on goal, with Anze Kopitar scoring on one of those shots shortly before second intermission. Rookie Drew Doughty added a second goal five-plus minutes into the third period; it was Doughty’s second career goal.

The Islanders scored their lone goal with 1:55 remaining in the game, yet could not tie the game despite a 6-on-5 advantage in the final minute. For the game, New York (0-1-3, three points) remained winless on the season and attempted 29 shots on goal, compared to just 22 for Los Angeles. However, Kings goalie Jonathan Quick stopped 28 Islander shots to preserve the victory.

Through Monday’s game with the Islanders, the Kings did not allow a power play goal in their last 10 penalty kill opportunities. The Kings now face off against the Rangers, while the Ducks return home to host the Minnesota Wild; both games are Wednesday evening.