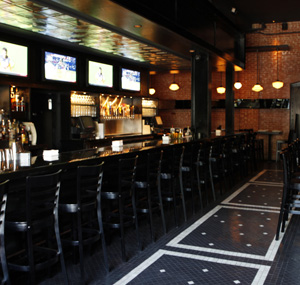 Get your “pub grub” on while watching the game at Essex House.
(Credit: Collin Thalken)

Football season is here, and that means the return of that uniquely American tradition: Monday Night Football. Where you watch the game is important to your enjoyment of the game, especially if your favorite team is not playing that night.

You’ve got your traditional purveyors of pigskin who offer beer, babes and brats (Hooters and Big Wangs come to mind.). However, I’d like to offer the “Three Little Bears” approach to finding the Monday Night viewing option that’s right for you. Three Monday Night options with three different directions – you can decide for yourself which one is “just right.”

Taking an upscale approach is Blvd 16, located in the Hotel Palomar in Westwood. The bar has a lounge feel with music in the background to accompany the game commentary.

The food reflects the upscale vibe and includes football pairings; that is, the Monday Night special starter and drink will reflect at least one of the teams. Since the Miami Dolphins were playing when I went, the special was Cuban pork sandwiches and mojitos, naturally.

In addition to the specials, which are half-priced from 4 p.m. until the end of the game, Blvd 16 offers a “six-pack” special, a combination of any six appetizers from the happy hour menu and/or the drink special, for $25.

The menu includes standards such as sliders, calamari and herb fries (using herbs grown on the rooftop garden). Non-traditional Monday Night fare includes a major hit – grilled flatbread. This night it was figs, ricotta and blue cheeses, pecans and arugula, cooked thin and served on a wood plank.

This type of non-traditional Monday Night football grub and atmosphere makes Blvd 16 a great choice if your girlfriend wants to go out, yet you still get to watch the game. A classic win-win.

Falling in the middle of upscale and down-and-dirty is Essex House. Located in the heart of Hollywood Boulevard, Essex House offers up items you would expect to see further down the road in Beverly Hills (duck confit, clams casino, seared ahi.) However, they don’t leave the rest of us out of the picture, offering up their “pub grub” menu, which includes sirloin bacon burgers, grilled pizza and, my personal favorite, the short rib Shepard’s pie – boneless braised short ribs that melt in your mouth, with baby carrots and onions, topped with horseradish-whipped potatoes.

Lest I forget, the main attraction: the beer selection. Twenty beers are on tap with over 35 beers available by the bottle. These guys really know their beers, and some of the selections include catchy names like “Uncommon Brewers Siamese Twin Ale.” What’s also great is that they will let you sample as many of the beers on tap until you find the one you like.

The layout is as attractive as the menu, with high ceilings, brick walls and lots of tables facing the bar to catch the football action. Happy hour prices are in the $4-$7 range, so you’ll have plenty of cash to splurge on the Blueberry Bomber beer float. Yes, it’s an ice cream float using beer, just like mom used to make.

This is your classic Monday Night scene – 20 flat screen TVs, a 120-inch big screen, high table tops, cozy booths and lazy boy couches guarantee there is not a bad seat in the house. There is even a living room section with a 50-inch plasma television with a Wii to play if the game gets boring. Of course, if you’re uninterested you can just sit back and do a bit of crowd watching.

There are Monday Night discounts on beers and $4 Mimosas and Bloody Marys. You won’t find any duck confit here, but you will get fiery-hot chicken wings and an artery-clogging Frito pie that is so wrong, it’s right.

Another bonus: The Draft offers free WiFi, so you fantasy football nerds can track your team’s progress in real time.

Bottoms Up
Oktoberfest: (Micro)Brew Up Some Fun
2,545 views

Bottoms Up
Dive Bars: Good ’til the Last Drop
2,890 views