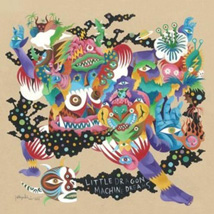 Gothenburg, Sweden has produced some fine bands and musicians in its time. That being said, Little Dragon might have felt a bit of pressure to represent their city as well as the others, but they have risen to the occasion.

Their second release, Machine Dreams, is already heavily promoted on KCRW, who have had them on heavy rotation since 2008. Machine Dreams is eclectic in its blend of pop, jazz and R&B against Nagano’s elegant, chic vocals.

One thing I love about this album is there’s a song for your multi-dimensional personality. From “Runabout,” which sounds like it could have been released during the Sheila E. or Ready for the World era, to the new wave nodding “Looking Glass,” the album is all over the place, in a brilliant and melodic way.