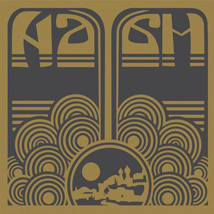 Do you like zoning out to heavily fuzzed space-riffs that extend for a whole song? If so, slap the debut album by Brooklyn’s Naam in your CD player. Then place it on your home altar next to the candles and incense. Then start a petition to get it sent out into space on the next NASA probe so 100,000 years from now some unknown alien intelligence can have the chance to grok heavy American psychedelic music. And what, you might ask, would be more important for them to know?

Standing on the shoulders of giants like Blue Cheer, Iron Butterfly and the MC5, Naam have carved out a place for themselves in the lineage of acid rock, which today might get them classified as stoner rock. But what’s in a name? Like Om and the Black Angels, Naam defy unnecessary pigeonholing in the world of heavy music.

It’s doomy and as thick as blackstrap molasses, but with enough abrupt tempo changes to remind you that the band is fully awake. It is you, the listener, who dreams.