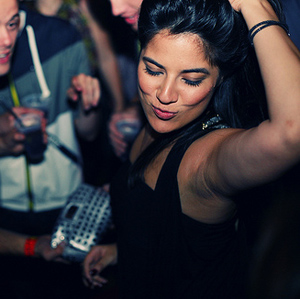 The crowd gets down at Discotheque Fridays at Club 740.
(Credit: Shaunt & Levon Gharibian; clubsoda.fm)

A good thing about living in Los Angeles is that it hosts some of the hottest club nights in the world. There are many different club scenes to choose from, and each caters to a variety of tastes.

Los Angeles is also home to some of the most prominent nightclubs in the country. Every venue has its own individual persona that can be felt in the aura of the nightclub’s setting.

With so many clubs to choose from, timing is what defines a hot spot. The same venue on any given night may have a different promoter, music selection and crowd. We’ve ventured around the L.A. area to find the hottest club nights.

For the working class, weeknights might not seem like a popular time to go clubbing, but these are actually some of the greatest days for an evening out.

Wednesdays are the new Saturdays in Hollywood at a new club called MyHouse (7080 Hollywood Blvd., Hollywood; myhousehollywood.com). A spot for celebrity sighting, MyHouse flaunts a Los Angeles-infused, swanky interior and up until recently was home to a residency by the late DJ AM.

A few blocks down is a Wednesday night hotspot called the Ecco (1640 N. Cahuenga Blvd., Hollywood; eccohollywood.com). The Ecco is a trendsetter in more ways than one: This eco-friendly ultra lounge offers free valet parking for hybrids and has a solar-powered roof. Also, DJ gigs at the Ecco are often streamed on the Internet for the viewing pleasure of those who cannot attend.

For kick-starting the weekend, there are a few Friday spots to choose from, however, one of the newest nights may require a drive downtown.

Resident DJ Destructo brings you Discotheque Fridays at Club 740 (753 S. Spring St., Downtown; 740la.com). Often booking some of the freshest acts in electronic music, selectors include some of those on the bleeding edge of electronic music. The basement level of the two-story venue is where other resident DJs spin some of the dirtiest electronic. It’s dark, it’s loud and it’s bangin’.

If Downtown is out of the way, or if you’re simply in need of a club fix in the wee hours of the night, Control happens every Friday evening at the Avalon (1735 Vine St., Hollywood; avalonhollywood.com). Control has big names booked every week and features resident DJ Mr. White, an L.A. favorite. From super funky beats to glitchy, distorted beats, Control brings them all for your listening pleasure. Beyond the music, Control is also noteworthy for being an 18-and-over gig.

For the more mature, laid back clubber, next door to the Avalon is the newly remodeled Bardot (1737 Vine St., Hollywood; bardothollywood.com). Formerly known as the Spider Club, Bardot is a smaller, yet more sophisticated club boasting a ’20s-style glam setting with a darker, more intimate appeal. Aside from Fridays, Bardot hosts a weekly known as La Boum on Wednesdays which has a chic, crossover appeal to fans of more eclectic music. The moniker for the event is French for “the party” and is one of the more exclusive events in Los Angeles. La Boum has included live performances by Devendra Banhart and others.

Up until recently, in an unsuspecting intersection of the Hollywood neighborhood known as Little Armenia, was a small bar called Temporary Spaces. The location shuttered its doors last month, but reincarnated at a new location on Melrose Avenue that has been appropriately named Temporary Spaces 2 (4658 Melrose Ave., Hollywood) and continues the hit weekly known as Big Saturday. Often sponsored by URB Magazine, the in-the-know spot has been home to inexplicably fun parties, with local DJ Mike B often taking control of the decks.