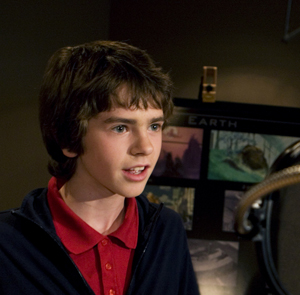 He’s the most famous boy in the world. OK, true, he was “born” back in 1952, which technically makes him a Baby Boomer. But Astro Boy is here to stay.

Astro Boy’s story starts when a precocious student named Toby crashes the office of his father, Dr. Tenma (voiced by Nicolas Cage). An experiment being conducted goes horribly awry, and wouldn’t you know it, Toby gets in the way. The boy doesn’t make it out of the accident alive.

Grief-stricken, Tenma creates a robotic doppelgänger of his son but soon finds that his creation is nothing in temperament like Toby. Distressed, he shuns the robot, who winds up wandering off to the surface world. It is here that Tenma’s creation – Astro Boy – befriends a group of human orphans, including a fiery teen named Cora (Kristen Bell).

The kids take their new friend to live with them and an eccentric inventor named Hamegg. However, things go wrong for Astro Boy when his secret is inevitably uncovered. It will take courage and strength for him to fight all the fears and dangers around him. But his biggest obstacle will be finding his way back home.

For Highmore, there were many layers that he used to create a well-rounded character.

“It was really interesting to play,” he says. “They are quite different. Toby is, like most of the humans, quite dismissive of robots and, of course, Astro Boy is a robot.”

The young star found the themes that his character endures to be universal and commends his determination to continue on, despite the strife that he encounters within the film.

“Astro Boy definitely learns many things about himself and about how to live in the world. He realizes that he has all these amazing powers,” says Highmore. “As he discovers his powers, the audiences discovers them as well and hopefully they go through the emotions with him.”

Bell also enjoyed the spunk and vigor of her character. She was well aware of the international popularity of Astro Boy, particularly in Japan, where he was created.

Much of the care and attention that she placed on her portrayal of the teenage Cora was the same spark that drew her to the role. Despite the young age of her character, Cora has faced a number of challenges, including her separation from her parents who live in the tony Metro City (where Astro Boy once lived with Dr. Tenma).

“I loved Cora’s attitude, her sarcasm and her ability to be witty,” admits the actress. “At the same time, she takes good care of the kids that she lives with. She’s really tough, but she would never betray them or want to be betrayed by them. She gets her sense of family from those kids. She is like the group’s den mother.”

Even Cage felt a sense of reverence for his role. A longtime fan of comics, the actor enjoyed the original black and white series

“There was a tremendous amount of emotion in those Japanese cartoons,” he recalls. “I couldn’t take my eyes off of it. There was this marvelous charm in seeing somebody that small be that powerful. I think that’s something that a lot of children can get in step with.”

Still, despite his fervor for the underlying humanity that Astro Boy the film conveys, Dr. Tenma is, at times, very cold and distant. Cage was one of the few characters who had to rely more upon his practical nature. But he concedes that everyone involved with the project did his or her very best to stay as true to the legacy of the characters as possible.

“I think everybody involved has a sense of responsibility for it,” he explains. “We want it to be a moving experience, because we are connected to the material. My hope is that audiences receive this movie in the way they did earlier classics like Pinocchio or The Iron Giant. Those movies are fun to watch, but they also bring so much emotion with them. Astro Boy tries to do more than to just wow you with special effects. It tries to get you to feel something on the most poetic and sublime levels.”

With a great adaptation, the aesthetic integrity of the piece is always in question. The exceptional visual quality of the feature was one of the big draws that have continued to dazzle Highmore.

“They kept some of the tradition of manga, but altered them slightly,” says Highmore. “Everyone has their own image of Astro Boy and so nothing is going to be exactly like the manga or exactly like the TV show, but the original core of the characters is still there.”