Last Cup: Road to the World Series of Beer Pong 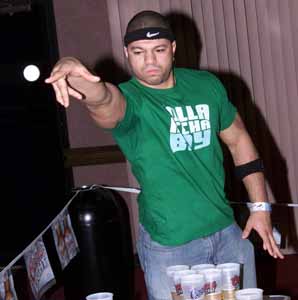 It seems you can make a sport out of anything when competition is involved. Enter New Hampshire, the New England state that a failing U.S. Geography college student would be reticent to point to on a map. Yet, it is the reason most college students know of the great wonder that is beer pong.

Last Cup, a documentary based on the drunken college “sport,” capitalizes on the 50-year-old craze that originated at Dartmouth College. It takes an amusing and compassionate look at the modest efforts by Billy Gaines and Duncan Carroll as they coordinate the second annual World Series of Beer Pong in 2007 and attract beer aficionados across the country.

Rather than trivialize the fact that over 500 people are getting sloshed in Mesquite, Ariz., the site of the event, the documentary spotlights select participants and follows them from their preparation months before to their struggles during the competition.

Last Cup briefly touches upon the initial success of the inaugural Series in 2006 that attracted 82 teams of two for a $10,000 prize. With double the prize money and triple the participants the following year, the documentary balances its focus between Carroll and Gaines and four of the contestants: Antonio “Tone” Vassilatos, Scott “Iceman” Reck, Sean Foster and Jamie Clouser.

Reck and Foster are the highlights of this documentary. Reck rides too much on winning the competition because he views the championship as the answer to everything that’s wrong in his life. From his obesity to his inability to graduate from college, he feels winning will magically solve all his problems. Foster, on the other hand, is a computer genius who writes programs that help him gather statistical data on his accuracy. He feels he has the edge because he can guess his odds against opponents.

Clouser and Vassilatos don’t hold much stock in this other than providing a polarizing perspective with their overly competitive and macho attitudes towards the game. Aside from their drama, Last Cup has many moments that inspire laughter and awe at some of the participant’s foolishness.

From team names like “Josh’s Mom is a Slut” and “Hummel That Shit” to some of the psych out maneuvers used to distract opponents, it serves as a reminder that beyond the competitive aspect of the game, there’s fun to be had at the bottom of the beer cup, even if it’s the one that eliminates a team out of the event.