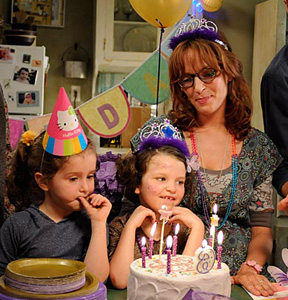 It always seems to be explained more as a state of being than an occupation. I mean, ask any mother and she will tell you the pay is worse and the hours are unimaginable, but unlike every other job which can take your title, strip your pay and kick you to the curb, motherhood is a blissful state of unadulterated love.

Or so I, a 20-year-old who loves kids (but couldn’t have some of my own right now), thought about life’s original occupation. My own mother always told me it wasn’t easy raising children. And after seeing Katherine Dieckmann’s latest film aptly titled Motherhood, I am sincerely second-guessing my aspirations.

Eliza Welsh (the overly dramatic Uma Thurman) is a mommy-blogger whose site “The Bjorn Identity” reports the funny, unusual and mundane events in the life of a mother in Manhattan’s West Village. She lives and works on the second story of a walk-up tenement building in the midst of wealthy Greenwich Village. Her marriage to a kind, though absent-minded writer (Anthony Edwards) is at a virtual standstill, and her baby Clara is turning six.

With the help and humor of her best friend Sheila (Minnie Driver), Eliza endures a day of mommy hell. Her car is moved for filming, she is forced to deal with overbearing moms on the public playground, she has to fix the cake the baker messed up, she must attend to the fight she has with Sheila and all the while she prepares for the all-encompassing birthday party of her soon-to-be 6-year-old.

To add to her stress, Eliza decides to enter a contest to be published in an upscale parenting magazine. She has to write 500 words on the question, “What Does Motherhood Mean to Me?” What’s a woman to do?

Just watching Thurman run around from scene to scene, her hair a total flop and often wearing pajamas, I needed a nap. The film tirelessly exploits the clichéd, frantic mother until the character is beaten to a pulp by other eccentric mothers and a to-do list that runs down the manicured street and around the corner.

What was most disappointing about the film was its doom-and-gloom outlook on motherhood. There may have been one moment where Eliza shows affection for her daughter; the rest of the time she is too overwhelmed and upset to enjoy what motherhood is supposed to be all about.

And even though my mom told me it wasn’t easy raising children, I like to think it wasn’t all that bad.