Get Your Dance On 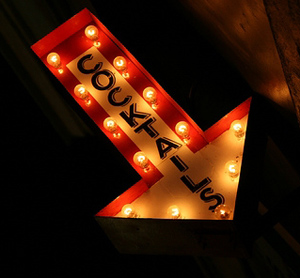 The Bullet at the Vine Bar

Los Angeles has long been considered the coolest place to party and get into all kinds of sin. Sure, New York’s got its downtown scene and fashionistas, but Los Angeles is known for sex, rock, good bodies and dirty deeds – done dirt cheap.

Still, it can sometimes be a bit daunting to find good places to hang in a city this big. After all, there’s a new club on every block replacing an old club that just couldn’t cut it.

There’s also the issue of the various neighborhoods to have fun in. For instance, it’s not always feasible for kids on the East Side to schlep all the way to Santa Monica for fun. Just like I don’t suspect most kids from Culver to end up in Echo Park on a Saturday night. Yep, there’s a fine art to clubbing, but it’s one that is full of good times when you’ve got a fine eye for the best spots.

One place that really takes me back to my New York City days is the Bullet at the Vine Bar (1235 Vine St., Los Angeles; 323-871-4060). This party is for all the mod kids out there. What sets the Bullet apart from the pack of other club offerings is that it’s one of the few places someone can go to do their thing to the sounds of yesteryear.

The crowd at this party is also pretty diverse. Lots of fashionable kids from all backgrounds strut and do the mash potato with the same liveliness that their moms and dads embraced back in the day. The best thing about this night is that it’s always relatively cheap. Try RSVPing for special events to avoid the cover charge.

About eight years ago, I was casting for my second film. My friend and I took to the streets of Hollywood – Melrose Avenue to be exact. We came across this cute kid in a Strokes T-shirt and offered him a role in the movie. That kid’s name was Jeff. He is now known to friends as DJ Bipjeffington. With a stellar career under his belt, Bipjeffington is now a sought-after spinner whose musical taste has set dance floors blazing for years.

If you’ve hung out at Bang! (7070 Hollywood Blvd., Los Angeles; clubbang.net) or Avalon (1735 Vine St., Los Angeles; avalonhollywood.com) over the weekends, you’ve surely done some booty shaking to his sounds. Bip Jeffington was one of the first in town to introduce crowds to acts like Justice, the Fratellis and the Klaxons.

His fans and the crowd he attracts are super fun and always really friendly. But the best thing about this hip, young DJ is the fact that he’s got a nice guest list that is always open to friends. So if you’re chillin’ in Hollywood on a Tuesday, Friday, Saturday or Sunday night (Hell, I’m sure he’s spinning somewhere any day of the week.), bummed that you don’t have the money to kick it at TigerHeat, just hit up Jeff (myspace.com/bipjeffington) and pray that the God of clubbing will shine benevolently upon you.

Now, many of my gay besties have told me on and off again that these clubs have had their day. They’ve told me that [insert passing fancy here] is the new hot hangout. They’ve complained that the boys are too young at these places. They’ve complained to me that the boys are too old at these places. And yet, we still end up there, having the time of our lives.

The music here is very house-y and full of that thump-a thump-a techno that you know and love. But what I love most about these places (aside from the cheap drinks) is that I can go to either and dance without a bunch of dudes attempting to artificially inseminate me through my Rock & Republics. I mean, why are you all up on me, bro?!