A Draw On the Road 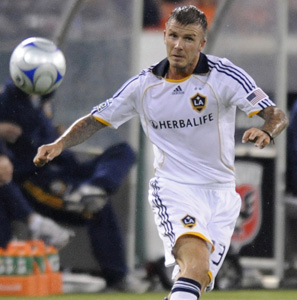 The Galaxy went into Houston, Texas Oct. 18 hoping to secure the crown of the Western Conference, but the squad earned a scoreless tie against the Dynamo. It was a defensive battle throughout, as each team looked to move ahead of the other.

Galaxy goalkeeper Donovan Ricketts had four saves, while the squad’s forwards could not capitalize on scoring opportunities. The most prominent segment of the match came in the 83rd minute of play, when star midfielder David Beckham and Houston’s Ricardo Clark were involved in a minor, physical and verbal altercation. Beckham was issued a yellow caution card for a previous foul on Clark.

The Galaxy hosts the San Jose Earthquakes at the Home Depot Center; Kick-off is at 7:30 p.m.