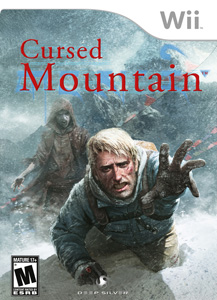 Part 1: I Will Survive

Are you sick of parties? Do you hate Jell-O shots? Afraid someone else is going to have an identical Amy Winehouse costume? Skip the parties this year and celebrate the scariest day of the year with these gruesome goodies.

While horror films seem to have used every locale imaginable, survival horror games seem to be stuck in civilization. Sure, we all know that malls are great for zombies, but there are so many other places to be murdered. Fortunately, “Cursed Mountain” is here to offer a breath of fresh air before your heart is ripped out.

The game follows mountaineer Eric as he looks for his lost brother Frank on the sacred mountain Chomolonzo. Upon setting foot in the abandoned village at the base of the mountain, however, you will realize that frostbite is the least of your worries. Frank seems to have angered the native ghosts and spirits and now they are after you.

Unlike traditional survival horror titles where your continued existence is based on how well you can avoid contact, “Cursed Mountain” is part of a new school of survival horror. This new style of survival horror offers powerful weapons and even more powerful mobs. The result in this game is that you will be stabbing and shooting ghosts with your mystical ice axe (Yes, you read that right.) while exploring.

The game does offer a very deep storyline, but it comes at a bit of a cost. The cutscenes are done with still images, a decision that may have been stylistic but it comes off a bit low budget for a new game.

The game’s story also involves quite a bit of reading because the voice-over segments are understated at best, confusing at worst. This is made worse by the abundance of local terms, names and deities that are mentioned, making it hard to remember which foreign name refers to which character, item or theological construct.

That said, “Cursed Mountain” is an enjoyable, genuinely creepy romp through a unique killing ground. While the Wii remote functionality can get a bit unresponsive, the gameplay is typically fun and intuitive. It is just a great game to play on a cold, dark night.

“Demon’s Souls” is not actually a horror game, but rather an action RPG where survival is pretty much impossible. To say this game is for hardcore gamers is an understatement. Between the universally tough enemies, the massive bosses and the far-too-common death traps, the end result is a murderous slog that will brutalize even seasoned gamers.

Unlike other games, though, death is not an escape from the pain that “Demon’s Souls” has in store for you. When you die – and you will die often – you are then resurrected as a weakened spirit. You then have to try to conquer the same task with only a percentage of your health. It is an interesting game dynamic, but the result is that it punishes exploration and will undoubtedly drive casual gamers away.

That is not to say this is a bad game – far from it, in fact. The character design is amazingly deep, offering a wide range of designs and classes to fit many gamers. Once you get into the hack-and-slash world of demons and demon-spawns, the gameplay is fluid and the worlds are gorgeous. That is, of course, until you become a bloodstain on the landscape.

One of the truly interesting additions to this game is the ability to leave and read notes left on the PlayStation network. You can mark the ground with warnings about ambushes or send your fellow gamers to a hidden merchant. Best of all, if players like your note, they can reward you with a character boost by recommending your note.

Of course, no amount of character boosts will save you when a dragon swoops down and chars your still writhing corpse. And trust me, they will.

You know that a game called “Zombie Apocalypse” is going to be good, old-fashioned undead killing fun. What you might not realize, however, is that this is a party game. If you can find three friends who are as into filling the walking dead full of lead, then this game will be happy to provide you with the brain-hungry targets.

For the more game-literate, “Zombie Apocalypse” mixes the cooperative zombie killing of “Left 4 Dead” with the top-down, run-and-gun action of “Smash TV.” If you aren’t as big of a gamer, this means that you can play as one of four gun-toting survivors as countless waves of zombies bear down on you. Fortunately, the simple controls will have you killing more than your weight in corpses in no time.

Perhaps the best part of this game (and with most horror titles) is the injection of humor. Zombies quickly go from simple shambling corpses to cadaverous construction workers who pin you down with their sheer weight and knife-throwing granny zombies. To combat this, you can toss a chatty teddy bear that happily announces that he is full of love and C4 explosives before blowing the congregating corpses to bits.

Like most downloaded Xbox Live Arcade and PlayStation Network games, “Zombie Apocalypse” is a bit repetitive, but they do a good job of changing things up with unique challenges like blackout maps. Even with the repetition, it is pure zombie destruction. Do you really need anything more?