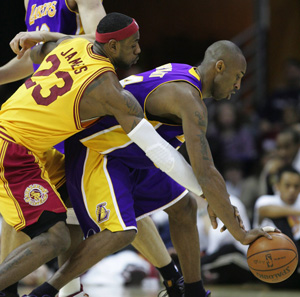 Kobe Bryant and Lebron James aim to meet in this season's NBA Finals.

There are five questions that an NBA fanatic must be thinking of now that basketball season has arrived, and they all pertain to the Los Angeles Lakers:

The answers are: yes for some, a less certain affirmative for others. The Lakers, the city of Los Angeles and fans worldwide want another championship. Coach Phil Jackson holds the magic stick to lead the squad, while newcomer Ron Artest comes with added toughness, aggressiveness and experience, but it will not be an easy trip to the finals.

The same teams from last season could meet again in the finals, but it won’t happen, mainly because the Magic will not be able to defeat either the Cavaliers or Celtics in a seven-game series. Both Cleveland and Boston have added vital depth and integral experience to their rosters.

Most of the NBA nation is dreaming of a Lakers and Cavaliers finals match, but they won’t call it that. Rather, it would be a Bryant versus O’Neal showdown.

However, this probably won’t occur because the Cavaliers cannot defeat the Celtics in seven games. One other thing to keep in mind is that the Celtics will have home court advantage in the Eastern Conference.

There are five teams that could potentially challenge the defending champions in the Western Conference during the regular season and en route to the championship stage. These squads are: the Denver Nuggets, Utah Jazz, Portland Trailblazers, New Orleans Hornets and San Antonio Spurs.

Denver is coming off their most successful season ever, and now they will have leader Chauncey Billups for an entire year. Home court advantage is at stake for the Lakers against this team, especially because Denver feels they have much more to prove.

With coach Jerry Sloan guiding the way, Utah will provide tough match-ups for the Lakers. Carlos Boozer and Deron Williams would have to be nearly perfect in order for them to reach the finals, though.

The Portland Trailblazers are a force to be reckoned with. This is perhaps the most exciting team with the best fans in the country. Portland is hungry to win. They are young, potent, talented and now they have some experience under their belts that could very well guide them to a Western Conference Championship series berth. Portland could very well end up going 41-0 at home. They feed off that loud and vibrant energy from their sixth man.

If healthy, New Orleans could dominate just as they did in the 2007-08 season when the group finished as the second seed going into the playoffs. Chris Paul is unarguably the best point guard in the game, and his supporting cast is key to their success as well.

San Antonio is perhaps the most challenging opponent for the Lakers this season. They have the experience, talent and leadership to accomplish anything they set their eyes on, especially because they have added another scorer in Richard Jefferson.

These five teams present intriguing, yet dangerous match-ups against the Lakers. Nonetheless, the purple and gold should hold the conference crown yet another time. Everyone in the Lakers organization is looking to create another dynasty; they started that last year and they will continue this now.

But what about the Clippers? For the entire season, now that they have a true power forward, they will look to establish a new identity. They have a true point guard, center and supporting cast. What the team will certainly look forward to accomplishing is improving by game in order to prepare themselves for the following campaign. But their inexperience in big games will be the difference in their season.

Blake Griffin will be the Rookie of the Year, no doubt. The Clippers can certainly make a case in themselves to make the playoffs in one of the two last seeds, but it will be hard.