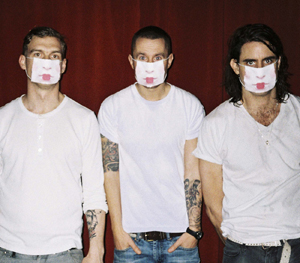 Miike Snow at Spaceland? It was almost too good to be true! But, as I arrived at the historic venue I knew that it WAS true. As my eyes followed the line around the block, I knew that Miike Snow were truly in the house.

The band came on stage wearing white masks, as they have for most of their tour and in parts of their music videos. They kicked off the evening with “Burial,” setting the tone for the rest of the set by turning this rather straightforward, analog-electro hybrid track into an elongated, full-on electronica vamp session.

This was a sweet surprise for electronic music lovers like myself, but many in the crowd seemed a little confused. The show wanted to be a Euro dance party with fat synths and ethereal-delayed arpeggios, but the Wednesday night crowd seemed to be in a mood to merely spectate.

When the band went into the extended version of “Silvia,” the popular song from their self-titled debut album, the audience livened up a bit. Like most of the songs they performed, they went into a club-inspired, electronic instrumental section in the middle.

At the end of “Silvia,” the lights went down, and the band dramatically took off their masks and went into “Animal.” Surprisingly, the crowd started to sing along even louder than on “Silvia” (the more popular of the two tracks). “… I change shapes just to hide in this place, but I’m still, I’m still an animal …” It was definitely the high point of the show.

“Sans Soleil” came next. The album version is a very lyrical song highlighting singer Andrew Wyatt’s voice and songwriting skills, but live, it just didn’t shine. “In Search of” made it all better, though. The precise pounding of the club-style bass line, energy of the fat synths and the delicate melodies made this my favorite performance of the night.

In the end, I don’t think Spaceland (the crowd), or Spaceland (the venue), were ready for Miike Snow. Throughout the show, the vocals were inconsistent, muddy and drowned out by the intricate instrumentation and arrangement of each track.

This had nothing to do with Wyatt’s performance – he performed wonderfully. It was more the technicality of micromanaging the many effects being processed and synths being manipulated at once and successfully mixing it all together. All of this just never seemed to gel properly throughout the whole show.

Because most of the Miike Snow album is produced with meticulous and complex precision, I knew coming into the show that pulling off the songs live would be a feat, and I was really looking forward to seeing (hearing) it happen. But, it didn’t.

A Tweet I read after the show really summed it up by saying that the album is great but they can’t recreate it live; with a suggestion to hire a new sound engineer for live shows. This is exactly what I felt leaving the show.