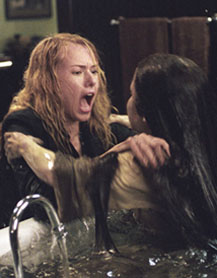 Horror movies used to have someone dropping dead with a meat cleaver in his forehead every five minutes or so. But things have changed. Now, people stand around while ominous music plays and we wait for something bad that we’re pretty sure is about to happen.

This 'I’m sure those scares will be here any minute' approach is exemplified by The Ring Two, and there are two key reasons for it: One is the popularity of Japanese horror movies such as Ju-On, The Cure and the original The Ring, which rely on suggestion and psychology for their creepy thrills. The other is an agreement forbidding studios from advertising R-rated movies on TV shows meant for children who can’t go to R-rated movies, which forced studios to make PG-13 horror films.

So, the PG-13-rated Ring Two makes us wait for the scares to show up. The first Ring was about a mom (Naomi Watts, who classes up both films) and son (David Dorfman) who watch a videotape and then learn that people who watch it all die within seven days. They figured out how to break the curse but, in the process, tangled with a devil child who returns to haunt them in Ring Two.

The new movie is damaged by the fact that it isn’t really a new movie. Oh, there’s a new location and a new attractive colleague to help mom (Simon Baker is the sacrificial stud this time), but she’s still investigating the mystery from the first movie, she’s still bugged by that same videotape, and her son is still staring at her with the haunted eyes of a car-crash survivor or a book-cooking tax accountant.

There isn’t really a story in Ring Two; more like three mini-stories that play out in succession. The result is a lurching quality and a movie without much flow or suspense. Director Hideo Nakata, who directed the Japanese The Ring but not the American remake, signed on to this sequel. He crafts a few indelible images – for instance, there’s an unsettling traffic accident that gets its zing from the fact that it starts with an everyday occurrence – and he gives the film a consistent, unnervingly humorless tone.

But a few jokes might have helped in two ways. The premise is goofy, so it would be wise for the movie to make fun of itself before we can. And jokes could have kept us from noticing how much of The Ring Two we spend waiting to be scared.