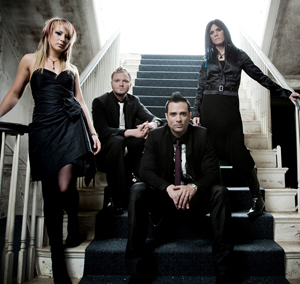 It is indeed true that time will distinguish genuine artists from the rest. Most bands come and go without anyone’s notice, and only a select few are here to stay. One of the champions is an obscure band with a quirky name, Skillet.

Formed in 1996, they have gradually grown to become a group of respected musicians, often compared to AC/DC and Metallica. Since their inception, many things have changed for the contemporary hard rock outfit, while other things remain the same.

The band’s star finally burst in 2004 – they earned two Grammy nominations for Best Rock Gospel Album in 2005 and 2007, and their songs have been flooding the airwaves, prominently featured on NFL Sunday Night Football promo spots, WWE WrestleMania and MTV’s “Bully Beatdown.”

Most recently, their latest offering, Awake, landed at No. 2 on the Billboard 200 pop chart. But John Cooper, Korey Cooper, Ben Kasica and Jen Ledger remain steadfast in their initial vision to spread a positive message to the public in this uncertain time of war and economic downturn.

Lead vocalist, bassist and songwriter John Cooper says, “[The band] was initially formed for an outreach for my church. And it has been my calling since to want to give hope and inspire people through my songs.”

The group opts for meaningful, often spiritual lyrics, and the absence of the obscene and vulgar material frequently preferred by their contemporaries is clearly evident. For example, their latest hit, “Hero,” is geared towards helping people regain their lost faith and unearth the hero inside.

Cooper says, “We sometimes feel like things are going crazy, and we have lost hope. But this song tells them they can still stand up for themselves.”

Additionally, Cooper finds inspiration from witnessing other people’s struggles. Admitting that music has provided him with an outlet to get through difficult periods in life, the song “Monster” was birthed as an outcry from a recent personal problem.

“This [song] shows a struggle because people sometimes have secret sides to them that they don’t want to show anyone,” he says. “It’s kind of a struggle between the flesh and the spirit.”

He adds that this song acts as a message to reach out to other people who might feel the same way, and to assure them that they are not alone. While the influence and worldview of religion is ubiquitous, Cooper also believes the themes of the group’s songs are universally relatable, and should not limit them to the gospel market. He is hopeful that mainstream music enthusiasts nowadays would be more willing to give their music a chance.

“I think young people nowadays don’t really care about the Christian music thing. If they like the band, they like it,” he says.

With the kick-off of Skillet’s 52-city Awake and Alive tour, it is evident that they won’t have difficulty finding an American following, as Panheads (a moniker for Skillet fans) across the nation are turning up by the hordes. Famous for their energetic live shows, the band promises to play new songs and make the experience memorable.

“We are all really excited. We can’t wait. We have been practicing and rehearsing for this. And we believe cool things will be happening,” Cooper says.

Being onstage is only natural for the members, as performing is their passion.

Personally, he feels rewarded to see the fans’ support during concerts.

“It’s the best feeling to have, to have people come and sing your songs,” he says.

In return, the band looks forward to leaving the audience with a feeling of rejuvenation.

“Through the concert, we want to encourage people to face the issues in the world today awake and alive.”