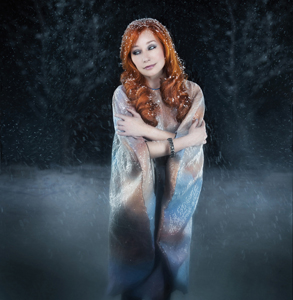 Midwinter Graces is the name of the upcoming seasonal release from Tori Amos. The chanteuse remembers that holiday carols at Sunday services and Christmas Day celebrations provided her very first exposure to music as a child, and now she re-imagines some of those songs including “What Child, Nowell” and “Star of Wonder.”

Amos works with a big band and an orchestra for the set of holiday remembrances, and she also wrote two new songs for the album: “Pink and Glitter” and “Our New Year.” Midwinter Graces drops Nov. 10.

Seven-time Grammy Award winner John Mayer is about to release a new album entitled Battle Studies. The effort is said to be a confessional, relaxed and liberated album that Mayer recorded in a private home in California over the course of six months, and the singer says you can expect the music to offer something a little different this time out.

“I approach music like a director doing a period piece,” says Mayer. “Where Continuum was R&B and soul, Battle Studies was written with the timelessness of Tom Petty, Fleetwood Mac and Neil Young in mind. The melodies and message are concise and from-the-gut with the efficiency of simplicity.”

Mayer is known for featuring collaborations on his albums, and Taylor Swift guests on the upcoming single “Half of My Heart.” Battle Studies drops Nov. 17, but Mayer won’t tour again until next year. If you want to see him before then, you can road trip to San Diego for a rare appearance of the John Mayer Trio at the Copley Symphony Hall Dec. 29.

Shock-rocker Alice Cooper has released a new single celebrating his favorite holiday, Halloween, and launched a karaoke contest to go along with it. Here’s how it works: Purchase Cooper’s “Keepin’ Halloween Alive” single at iTunes. Your purchase will include a bonus vocal-free “Cooper-oke” track that you can use to work out your own karaoke version of the song and then record it to video.

Videos must be submitted by midnight Pacific Time on Halloween, and Cooper himself will choose three winners. The First Place winner gets $1,000, Second Place gets $500 and Third Place takes home $250.

Contest details and video upload instructions can be found at nightswithalicecooper.com. Cooper will be in town a few days before the spooky holiday playing a show at the Nokia Theatre Oct. 28.

Russia’s biggest rock band, Mumiy Troll, have just released their first English language effort, a five-song digital EP called Paradise Ahead. The release comes on the heels of the American release of the band’s Comrade Ambassador earlier this year (Songs on that album are sung in Russian.). There’s no telling what language head Troll Ilya Lagutenko and Craig Ferguson will converse in when Mumiy Troll guests on “The Late Late Show” Nov. 2 since Lagutenko is fluent in English, Russian and Mandarin. Mumiy Troll hails from the frigid Siberian city of Vladivostok, but surely they’ll be comfortable in the warm confines of the Keyclub during their Oct. 30 show.

The latest album from Quebec-based Sunset Rubdown is called Dragonslayer, and the band says they hope that the true strength of the album is a hidden complexity that emerges slowly from within the straight production and raw musicianship, and from what sounds at first to be an only slightly skewed approach to pop. Huh?

When asked to clarify, Sunset Rubdown’s Spencer Krug adds, “We hope it’s like that one friend of yours who looks unassuming and normal, but once you get to know him it’s obvious he’s basically crazy.”

Never mind, Spence, we’ll just come to the Sunset Rubdown show at the Troubadour Oct. 27 and figure it out for ourselves.

The Bay Area’s Moore Brothers have released a new album called Aptos, and they’ll be showcasing the new music live in a rather curious place: The Echo Park Curiosity Shop and Art Gallery. Greg and Thom will be playing amidst the space’s outsider, fringe and freak art collection Nov. 28.