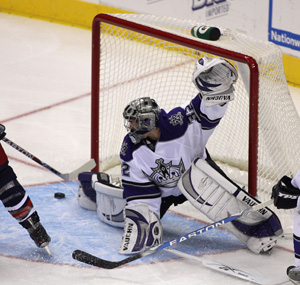 Those hockey players who reside at Staples Center certainly did not have a regal week; after claiming first place in the Pacific Division with a Columbus Day win on Long Island, the Los Angeles Kings (4-4-0, 8 points) dropped their next three games.

Meanwhile, a few hockey players living about an hour south at Honda Center were in quite the “fowl” mood themselves, as the Anaheim Ducks (3-3-1, 7 points) were mightily struggling to find the back of the net, what with the former Disney franchise shutout in two of its last three games.

Certainly neither team planned on finishing this past week looking up at the standings to see teams such as Dallas and Phoenix ahead of them, especially with the Kings in first place entering last Wednesday night’s game against the New York Rangers.

Alas, the Kings have an opportunity to get back into the thick of things as they return from a six-game road trip to host Dallas at Staples Thursday. A win here means the Kings could at least keep pace in the Pacific Division.

As for the Ducks, they need to find a way to put the puck in the net – and fast. Last week was a case-in-point, what with a 3-0 loss to the New York Rangers and a 5-0 loss to the St. Louis Blues bracketing a 3-2 win over Minnesota. Thankfully, they too can crawl out of the Pacific Division cellar quickly if they can beat Dallas (Oct. 21) and Phoenix (Oct. 31) before the month is over.