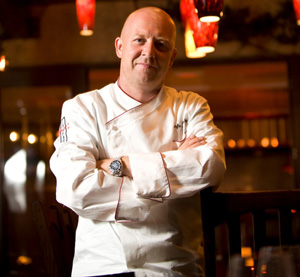 He won the most challenges of any contestant in “Top Chef”’s five-season history. Finnish born Stefan Richter, the runner-up to the crown on season five, takes food seriously: He runs a catering company, Stefan’s Catering, and recently opened Stefan’s at L.A. Farm in Santa Monica.

Just a couple of small steps on his way to building a empire, which is, he states, what you need to do in America. His future plans include a bar in Santa Monica and a steakhouse in Westwood.

For now, however, he’s enjoying the savory smell of his current success. Taking over the digs of the long-standing L.A. Farm, Richter has put his eclectic, although he calls it “simple and easy,” stamp on a plump menu.

Starters range from farmers’ market red and golden beets with goat cheese mousse and mesclun to lobster bisque with a hint of lemongrass, while entrées run the gamut from shrimp and scallop risotto with English peas, dill and champagne and lobster claw with asparagus to braised pork cheek and caraway sausage with sauerkraut pretzel dumplings and beer-sauce. Each dish is more delicious than the next, and if you’re splurging, opt for the Chef’s Sampler, a six-course meal planned by Richter himself ($80).

Stefan’s at L.A. Farm serves only American wines and beers because, as he exclaims, Richter loves America. While all of the desserts look incredible, there’s one with an especially sensational story: the red wine ice cream lollipop.

This is the dish that earned Richter his runner-up title; an intricately made cold treat with a chocolate truffle inside that didn’t impress the judges. Yet here at Stefan’s at L.A. Farm, it is the pièce de résistance, the finale to a scrumptious feast. It’s Stefan’s way of saying, “I told you so” to those who didn’t believe.

Date Night
Some first choices for dining in L.A. after last call at the bar
1,825 views