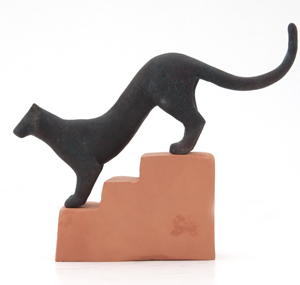 Intended as maquettes for large-scale pieces, the small works are considered as three-dimensional sketches in which form, movement, spacial arrangement and surface finish can be developed for the large-scale works. The purpose of these maquettes, as Murrill herself puts it, is to embody the things she aspires to.

On first impression Murrill’s animal kingdom seems to draw a tenuous link in the evolutionary tree to the work of British sculptor Kiki Smith, but on fuller inspection a deeper resonance with Antony Gormley emerges. There is a distinction between works, which take on a realist nature, and others, more reminiscent of Egyptian forms.

The latter have a characterization that seems to elevate or heroize the creature to a more elegant kind of mythical status. These slightly abstracted or stylized creatures are the strongest of the animal maquettes.

Movement and stance are explored in more depth in the grappling figures known as the wrasslers. These are small-scale entwined figures in various kinds of passionate embrace. The forms bring to mind both Eadweard Muybridge’s photographs of the wrestlers and Auguste Rodin’s The Kiss. These are the most compelling works on display and offer great promise for the large-scale versions, so the next installment of Murrill’s evolutionary process is not to be missed.

Murrill gained her MFA from UCLA and has been working in Los Angeles for 30 years. Murrill’s work is included in various museum collections, most notably, LACMA and the Norton Simon Museum of Art in Pasadena.