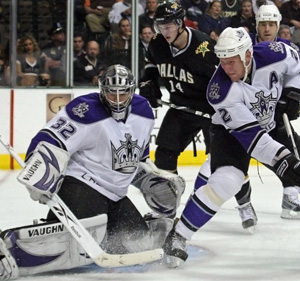 Anze Kopitar notched his first-ever NHL hat trick, but it took Michal Handzus’ goal 55 seconds into overtime for the Los Angeles Kings to defeat the Dallas Stars, 5-4, in front of over 15,000 fans at Staples Center Thursday evening.

Handzus saved what could have turned into a disastrous night when his unassisted one-timer from the left side found the back of the net within the first minute of the extra session, helping the Kings (6-4-0, 12 points) earn a victory over Dallas (4-2-4, 12 points) for the second time this week. Yet, the night clearly belonged to Kopitar, whose first career three-goal night – all scored before the game was halfway through – helped the Kings build a 4-1 lead.

“It feels great, but it almost didn’t feel great,” Kopitar said after the game. “We got two points, and that’s the most important thing right now. We just have to forget the last period of this [game] and move forward.”

That last period saw the Kings blow a three-goal lead, which Kopitar almost single-handedly built himself, when the Stars scored three goals within two minutes (by Jamie Benn and Mark Fistric) to cut the L.A. lead to 4-3. James Neal’s second goal of the game tied the score at 4-4 with 2:46 remaining. After both teams skated to a regulation tie, Handzus ended the game with his goal 55 seconds into the overtime period.

Adding to the scoring was Wayne Simmonds, who scored a goal in the first period; Alexander Frolov, subject to several recent trade rumors, added two assists.

With the victory, the Kings forced a three-way tie for first place in the Pacific Division. Dallas and Phoenix also have 12 points apiece, while San Jose is close behind with 11 points.

Kopitar’s three-goal performance gave him eight total scores for the season; the Kings are 5-1 this season when he scores a goal.

Meanwhile, Frolov made the most of his skate time on Thursday, after Kings head coach Terry Murray benched him in Monday’s game in Dallas for lack of effort.

However, Murray said he has no intentions of benching goalkeeper Jonathan Quick, despite his allowing three goals in the final 10 minutes of the game.

“Quick’s my No. 1 goaltender,” Murray said after the game Thursday. “I’m not changing my mind on that at anytime. He’s the guy we’re going to go with. This is a critical time for a goaltender. He now has to make the next step. He’s got to bounce back and get the job done. He’s got to toughen up emotionally and mentally.”