Burnt Offerings and Much More 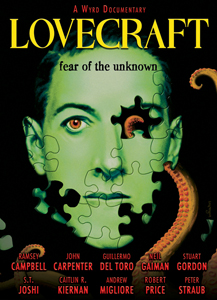 The Horror! The Horror! Need some recommendations for your Halloween film festival?

Burnt Offerings: Oliver Reed, Karen Black and Bette Davis star in this ’70s ghost story, about a house that exerts its evil force over a family. A case could be made for its influence on the more famous The Shining, predating King’s novel by several years. But it stands on its own merits, with some genuinely disturbing scenes.

Evil Dead II/Bubba Ho-Tep: Have a Bruce Campbell double feature with these two horror-comedies. Evil Dead II, the godfather of gore-comedy, is pure cinematic enjoyment, with as much energy behind the camera in Sam Raimi’s visceral style, as in front, with Campbell’s slapstick chops. Bubba was tailor made for cult status, with Campbell starring as a retirement home Elvis impersonator battling a demon.

Stranger Than Fiction: Join such luminaries of horror as John Carpenter, Neil Gaiman and Guillermo del Toro in exploring the life of the 20th century’s answer to Edgar Allan Poe in Lovecraft: Fear of the Unknown. H.P. Lovecraft’s influence is felt from Stephen King to Jorge Luis Borges, from the songs of Metallica to the Alien franchise. This feature-length doc examines the New England writer’s life and the legacy of cosmic horror.

The Vault: Seven films from legendary maverick filmmaker Sam Fuller make their DVD debuts in The Collector’s Choice: The Samuel Fuller Collection. They include: Fuller’s film noir directorial debut The Crimson Kimono, the ripped-from-the-headlines Underworld U.S.A. and five early films written by Fuller: It Happened in Hollywood, Adventure in Sahara, The Power of the Press, Shockproof (directed by Douglas Sirk) and Scandal Sheet. Included in the collection are conversations with Martin Scorsese, Wim Wenders, Curtis Hanson and Tim Robbins.

Foreign Fare: Il Divo is Cannes’ Jury Prize-winning film of political corruption in Italy, focusing on real-life demigod and seven-time Italian Prime Minister Giulio Andreotti. Toni Servillo (Gomorrah) gives a powerhouse performance in this tale of violence and decades-long corruption traveling from the Vatican to the Mafia. It’s a stylish and vibrant film.

Death in the Garden is an atypical adventure story from the Mexico Period of surrealist director Luis Buñuel. It takes place in a small South American village where a group of miners rebel against the fascist police force. A ragtag group made up of a prostitute, an adventurer and a priest must fend for itself in the jungle. International star Simone Signoret leads the strong ensemble cast.

The Idiotbox: “Tales from the Darkside” is a horror anthology show in the tradition of “The Twilight Zone” and “Night Gallery.” George Romero created the show, which premiered in 1983. Stephen King and Steven Spielberg are among the rotating talent behind the camera. The Second Season is now available.

Made in Japan: In Tokyo Majin: the Complete Series Box Set, dark otherworldly evils are rising in the streets of Tokyo. Only a group of high schoolers endowed with mystical powers can save the world from the undead!

Blu Notes: In time for the miniseries remake, The Complete Series of the original ’60s cult classic “The Prisoner” comes to Blu-ray. Patrick McGoohan, king of ’60s British spy TV, starred in and created the series about a secret agent who, following his resignation, is taken prisoner in a creepily idyllic village where everyone is a number. The iconographic series is full of great ’60s touches. The Blu-ray collection comes loaded with extras including a feature length documentary.

Also Available: Ice Age: Dawn of the Dinosaurs, The Art Star and the Sudanese Twins