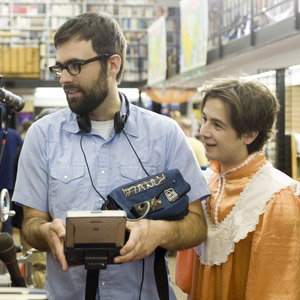 Jared and Jerusha Hess are masters of the awkward. After bursting onto the scene with their idiosyncratic opus Napoleon Dynamite, the young couple co-wrote and co-directed the Jack Black vehicle Nacho Libre before embarking on their latest effort, Gentlemen Broncos.

The film stars Michael Angarano, an actor who’s appeared in films such as Lords of Dogtown, Sky High and Snow Angels, but who is most often recognized for playing young William in Almost Famous (who shouts “ELEVEN?!”), as Benjamin, a fatherless, homeschooled, near mute pushover who dreams of writing sci-fi novels like his idol, Dr. Ronald Chevalier (“The Flight of the Conchords”’ Jemaine Clement, who is absolutely brilliant at channeling Michael York in Logan’s Run). After attending a writer’s camp, Benjamin’s world is thrown into turmoil by fellow students who option his book, Yeast Lords, only to turn it into a horrendous, no-budget, VHS massacre of a movie, and his hero, Chevalier, who steals the story and passes it off as his own to keep his career from hitting the skids.

For their third outing, Jared and Jerusha maintained a co-writing relationship, but this time Jared took sole directing credit, yet the film maintains all the hallmarks of their former work: the perky opening sequence showcasing beloved, if overlooked, inanimate objects (for Dynamite it was lunch room delicacies like tater tots; this time it’s sci-fi cover art), a quirky outsider with big dreams despite limited social skills and financial means and an obsession with home perms and mom jeans.

Asked if the new division of labor changed the flow of production, Jared smiles at his wife and offers, “She can predict every single dumb idea I bring to the table.”

“I’m so fine with him being the director,” Jerusha shrugs contentedly. “I’m fine with having my stamp on it in the beginning, but he’s such a great director, I know what [the film’s] going to be, and I trust him completely.”

“Every film we’ve done, we’ve written together,” Jared continues. “The process gets better as we go along. We spend a lot of time incubating our ideas. Usually we talk through it driving around or doing everyday things. By the time we finally sit down and write we have a pretty good idea of where it’s going. Then we go to the office and write for four or five hours a day.”

“When we finally nail a scene, we make out,” Jerusha adds.

“I WISH that would happen!” Jared laughs, incredulously.

“It totally happens that way! Every time something good is written, he’s like ‘Hey, baby,’” she hoots.

Part of their “organic” writing process, as Jared calls it, is mining their own lives for character inspiration. In Gentlemen Broncos not only is Benjamin based largely on Jared, but his mother, Judith (played by Jennifer Coolidge), is a blown-out version of his and Jerusha’s mothers, from the handcrafted popcorn balls to the career in the modesty nightgown industry to the term “chest ends” used in place of nipples.

“My mother is mortified we used anything from her,” Jerusha laughs, “but she’s a funny lady!”

“Jennifer actually went to lunch with my mother to see if there were any nuances she could pick up,” Jared says. “My mom was so nervous to be meeting one of her favorite actresses, she got her hair done and got all dressed up. She did a whole song and dance. When I saw Jennifer afterward, she said, ‘Your mom is nothing like the character in the script. She’s gorgeous and totally normal.’”

Their upbringing has always been a huge inspiration for the Hesses. They’ve used friends, family and childhood memories throughout their careers to create worlds all their own. In fact, even the movie’s title comes from a parenting book Jared remembers his mother reading often while he was growing up in a house with five younger brothers.

“It was called [something like], So You Want to Raise a Boy? written in the ’50s,” Jared recalls. “There’s a chapter in there where it talks about the age from 16 to 17 and the author referred to it as ‘The Gentleman Bronco Phase of Life’ when teenage boys like to take their shirts off and mow the lawn or something,” he laughs.

The film’s general production values and occasionally premeditated lack of production value were also born in the pre-pubescent mind of the director. Several pivotal scenes demand low-rent VHS video quality and others some seriously schlocky special effects. Those were the greatest delights of the filmmakers.

“Jared was behind the camera, living out his little fantasies,” Jerusha ribs.

“The camera system I know best is VHS,” Jared counters. “I probably made more movies on that than I’ll ever make on film.”

Whether it was the script or the special effects, Jared declares the film’s battle cry was three simple words: “Embrace the cheese!” he beams.