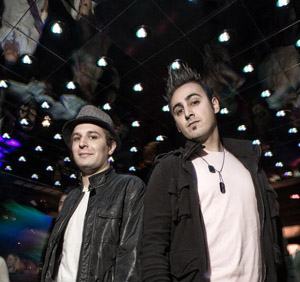 t’s holiday season again. Starting with Halloween, cities come alive with myriad ways for their inhabitants to create and share good times. That’s great news for everyone in Southern California.

I, like so many others, labor over trying to figure out how to celebrate all the big days of the year. I don’t really like enduring holidays with my dysfunctional family, nor do I want to hang out with my weirdly domesticated friends and their yuppie crew of nouveau-riche 20- and 30-something friends. Sometimes it’s great to just kick it with strangers, knock back some hooch and dance the night away.

This decade has seen Los Angeles shed its skin as the less popular left coast to becoming the premier spot for partying and kickass nights. There have also been a number of event planning companies to reach success during this boom.

However, one group on the horizon has carefully married its unique view of the club scene with some serious business chops. That company is Night Vision Entertainment.

Brett Hyman and Tomik Mansoori are the dynamic duo behind this new era of clubbing. What this means for you and me is that we’ve now been given a vastly improved upon model for gettin’ our grooves on socially.

Mansoori and Hyman have their skilled hands in clubs all over town. They’ve got a number of winning nights including Guys and Dolls on Tuesdays and Wonderland each Saturday. This is their latest club venture and proud collaboration with the Dolce Group – the nightlife and restaurant company responsible for Geisha House and Les Deux.

When you talk to Hyman about his company, he speaks with a cool sense of clarity and professionalism that you just don’t hear from other entrepreneurs. Much of that has to do with his academic background. Hyman attended Tulane University in New Orleans. Unfortunately, Hurricane Katrina cut short his stint there.

Down, but not out, he transferred to USC and began studying Entrepreneurship at his new school. After writing a term paper on the subject, Hyman decided to turn his studies into an actual venture. He feels that’s one of the things that sets his clubs apart from the pack.

Hyman feels that the two main objectives of his company are “to be profitable and to provide entertainment experiences for people across the United States.”

This will be evident as Night Vision gears up for the costumes and wildness of Halloween. Hyman and company will launch Pandora. This is the group’s own take on ventures like New York’s Limelight (which was a popular night club in the 1990s that was formed in an abandoned church, of all things).

Pandora is a nightclub exclusively created for Halloween and will usher in a weeklong celebration (from Oct. 27-31) at the beautiful Vibiana cathedral in Los Angeles. Pandora boasts such visually stunning treats as hot performances, awesome lighting setups and something that is near and dear to my heart: streamlined operation that will limit those obnoxious and pointless lines that we all hate waiting in. Pandora is seriously raising the bar on holiday celebrations, particularly for people who are so over the West Hollywood parade or dull house parties.

So what sets Los Angeles apart from all the other party scenes the world over, particularly the other hot spot, Las Vegas? That’s easy.

“L.A. nightlife is about exclusivity,” explains Hyman. “In Vegas, it’s probably the retro-opposite. It’s about, ‘How do I have the best time?’”

He says that Vegas revelers can experience the best the city has to offer with cold, hard cash.

Then there’s the difference in music. Night Vision takes great care to offer its patrons variety.

“The electronic thing is interesting; it’s just not taking hold here in L.A.,” admits Hyman. “I think we’re going to start to see more electro. I think right now there are just too many options. It’s the same type of DJ playing the same songs to the same type of people.”

For everyone bored with the norm, take comfort in knowing that someone out there is ready to give you everything you ever wanted, packaged just the way you’d like it.