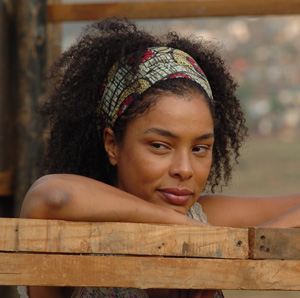 A powerful and poignant drama based on real events, Skin is the true story of a black child born in the ’50s to white parents in apartheid South Africa.

Sandra Laing (Sophie Okonedo) is distinctly black – in appearance at least – despite the fact that both her parents, Abraham (Sam Neill) and Sannie (Alice Krige), are white Afrikaners.

Store owners in a remote area of Eastern Transvaal, South Africa, Abraham and Sannie are unaware of their own individual black genetics and have lovingly raised Sandra as their white little girl. Things soon drastically change when she is sent to an all-white boarding school in the neighboring town of Piet Retief.

Ridiculed and shunned by her classmates, she’s finally examined by state officials after several complaints pour in from other parents and teachers. After being classified as colored, she is expelled from the school, and the story soon becomes an international scandal as her parents take the case all the way to the Supreme Court to have the classification reversed.

The movie follows Sandra’s 30-year journey from rejection to acceptance, betrayal to reconciliation, as she struggles to find a footing in a prejudiced world. Desperate to resemble her parents and brother, Leon (Hannes Brummer), she even attempts to scrub her skin white by using household cleaners when lightening creams fail.

With scenes carefully structured to tug at heartstrings, particularly poignant is the test state officials perform to ascertain Sandra’s race. This involves seeing if a pencil delicately placed in her curly hair would fall out with a slight headshake.

Okonedo (Hotel Rwanda) puts on a breathtaking performance as an older Sandra, while the younger Sandra is beautifully played by Ella Ramangwane.

A heartbreaking drama, Skin is one of the most moving stories to emerge from Apartheid-era South Africa and has already won numerous accolades.