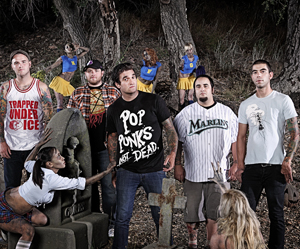 New Found Glory raises the dead, literally, in their new video for “Don’t Let Her Pull You Down.” The video starts out with a couple arguing about whether Twilight is a chick-flick or a vampire movie, but the pair soon finds themselves sucked right into their own movie as they join the members of New Found Glory in battling a group of flesh-starved zombie vixens.

The video can be seen on the band’s MySpace page, and while you’re there, you can get details on the upcoming release of “Don’t Let Her Pull You Down” as a limited edition colored vinyl 7-inch single. NFG will be playing zombie-free shows at the Bren Events Center in Irvine Nov. 14 and at the Palladium Nov. 15.

What kinds of music do Ryan Gosling and Zach Shields – a.k.a. Dead Man’s Bones – play? The duo describes their repertoire thusly: “The sound is a strange and delightful mix of otherworldly doo-wop songs about werewolves, haunting melodies telling tales of zombies with broken hearts and children singing the joys and pains of being alive or being dead.”

ANTI- has just released the self-titled debut from the macabre cabaret act, and Gosling and Shields are looking for a ghoulish choir to help them out during their local concert appearance. If you’d like to have a chance to share the stage with Dead Man’s Bones, then show up for the talent show that’ll precede the concert when the duo performs at the Regent Oct. 30.

String Cheese Incident are known to perform special concerts comprised heavily of cover tunes each Halloween, and now fans can hear the best cuts from these shows via a mammoth nine-disc deluxe box set. Trick or Treat contains seven full sets from shows recorded all over the country going back to 1998 and includes cover versions of songs by the Beastie Boys (“No Sleep Till Brooklyn”), KC & the Sunshine Band (“Get Down Tonight”) and Phish (“The Wedge”).

The big box set also contains special commemorative mini-posters, a photo booklet and other surprises. If you don’t want to pop for the box set, a pared-down two-disc set is available on CD, vinyl and as a digital download.

Powerman 5000 have teamed with harddriveradio.com to give away a robot mask that was used in the making of the video for “Super Villain,” the first single off PM5K’s just-released album, Somewhere on the Other Side of Nowhere.

“We made this record with a clear vision and a purpose,” says Spider, the band’s frontman. “We wanted to reclaim a sound we created and represent certain influences only a band like Powerman 5000 can. While writing we would watch Godzilla or Ultraman films to ensure the sonics were on point. We knew that this record needed to sound like the footsteps of a giant robot!”

The video was directed by Robert Hall (Fear Clinic) with help from award-winning cinematographer Brandon Trost (Halloween II) and stars actor Johnathon Schaech as the “super villain.” Details on how to enter the contest can be found at harddriveradio.com, and the winner of the mask will be announced Nov. 20.

Meredith Meyer is from Los Angeles, but her new album, It’s Spooky to Be Young, was recorded in Chicago in a place that many might see as scary – a studio located in the industrial part of town in an old spice factory situated on a drawbridge over the Chicago River. But Meyer says the setting was not the inspiration for the album title.

“The building was possibly haunted, but the title of the album was based upon the song, which was written long before. The album covers a lot of ground from personal experience but the whole thing together is really about finding innocence and magic despite weird times.”

Meyer is currently also at work co-writing songs for a movie musical.