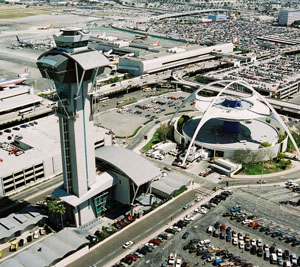 Since 1995 plans have been in the works to expand and improve LAX.
(Credit: lawa.org)

When was the last time you were at Los Angeles International Airport?

As Los Angeles’ primary airport (and the country’s third busiest), LAX shuffles more than 60 million passengers every year (not to mention the people who drop off/pick up passengers or go to work in the restaurants and gates every day) and in a lot of ways, it shows. The lines for security continue to get longer, parking in the massive, multi-level parking lots gets harder and the gates just smell like there have been thousands of people crowding around the doors every day. Apart from the Theme Building’s major renovation in 2007, the airport has remained largely unchanged for the past 25 years, with only minor construction updates being done here since then.

But all of that is about to change. Since 1995, plans have been in the works to expand and improve California’s busiest airport.

The project has been in and out of the public eye since its inception, but unless you happened to catch Mayor Villaraigosa’s presentation of design concepts in November of last year, it’s mostly been out. Though it hasn’t garnered a lot of media attention, the LAX Master Plan is finally past the planning stages and, with the airport commission’s approval of a $1.3 billion contract on Oct. 19, primed to start some new construction.

While the new Bradley West wing will not encroach upon LAX’s surrounding residential neighborhoods, it aims to both modernize and simplify the passenger experience and streamline traffic – both air and auto.

In order to improve safety measures for the airport, plans for Bradley West include larger than average gates to provide room for airplanes that hold more passengers, but the most major development in this arm of the project is the alteration to the taxiways. LAX plans to reconfigure its entire runway system to include a center taxiway in the hopes of creating better separation between runways and prevent collisions on the tarmac. But in doing this without disturbing the homes surrounding the airport, Terminals 1 through 3 will be entirely torn down to be replaced by a Satellite Concourse to the west of the Tom Bradley International Terminal and the two will be connected via an automated underground people mover.

But that’s not the only place where safety is going to be improved. In the terminal itself, new security measures will be implemented in a Central Terminal Area. This area will be the only place to check your luggage, but it will also be LAX’s primary security checkpoint. Here, new levels of passenger screening will be put in place to ensure passenger safety. Now, when I say “new” here, I really mean “still in development,” but LAX’s Master Plan Web site indicates we should definitely expect more stringent scans of checked baggage and stricter employee security screening.

The creation of this Central Terminal Area is going to mean the demolition of existing parking structures and automotive access to it is going to be limited (in case of a car bomb). What does that mean for you? In part, it means that random vehicle searches won’t bottleneck at the entrance to the airport and the drug dogs have a little more room to do their jobs. But mostly it means that unless you’re in LAX’s new FlyAway Program, there will be no more curbside drop-off and pick-up for you. Instead, LAX plans to build a Ground Transportation Center where Lot C currently is and will install an automated people mover to get you from the car to the ticket counter.

So in short, automated people movers are the way of the future that will arrive in Los Angeles (providing all construction goes as planned) in 2015. But until then, please continue to enjoy the LAX of yesteryear, in all of its sticky, crumbling retro design glory.