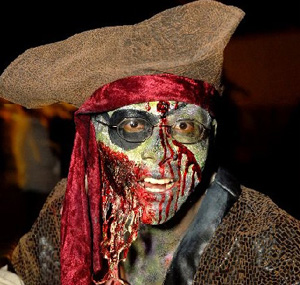 Hop aboard the Queen Mary for terror during Shipwreck.
(Credit: shipwreckhalloween.com)

This year-round tour takes you to see the real thing if you’ve got tough blood. Visit historical and haunted spots around Hollywood where the Black Dahlia actress was found slain and Marilyn Monroe died. You can even book a tour to see the departed fashionably, in a classic limousine.

Hop on the Dearly Departed Tomb Buggy and relive the horrific deaths of Hollywood’s past. Tour through almost 100 haunted destinations of famous scandal, murders and mysterious celebrity deaths. Spend up to three hours learning the tales of where blood was spilled and fans have gathered after dark events, so you can say you’ve been there, too.

Ghost hunting is the thing to do in Fullerton; the city has a past rich with the supernatural. This 1-1/2 mile tour of downtown Fullerton will introduce you to the spirits of Louis E. Plummer and the “angry woman” who haunts Plummer Auditorium and highlight the horrors of the local police station.

Board the haunted Queen Mary ship and get lost in the five terrifying mazes. Good luck escaping the crazy clowns, criminally insane, angry pirates, walking corpses and bloodthirsty vampires. There’s also a dance floor in Club Dead where you can make friends with the scariest and party it up, only if you make it out of the mazes in one piece. Plus, live bands, DJs and celebrity hosts.

On Friday, it’s Beacher’s Madhouse Costume Ball! Boasting the atmosphere of a circus and energy of a nightclub, you’ll be dazzled by gorgeous dancers, outrageous variety acts and magicians and jump into audience participation contests. Saturday is the official Playboy Halloween Lingerie and Costume Ball hosted by Playmate Brande Roderick with DJ Graham Funke, DJ Crystal Ellis, DJ Rhiannon, DJ Summer Altice and DJ Prophecy on the 1s and 2s.

It’s called the largest Halloween celebration in the world and this year several hundred thousand people are expected to parade in the streets with the most extreme costumes ever seen. If it’s craziness and costumes you crave, this is your scene. Check out the live music and performers on the many stages throughout the streets.

Launching his Hellbilly Deluxe 2 Tour, named after his new album that releases Nov. 17, Rob Zombie never fails to rock hard and include blood as décor, making this concert a perfect choice for Halloween. Plus, psychobilly band Nekromantix, Captain Clegg and the Night Creatures and the host, Uncle Seymour Coffins, recently featured in Halloween II. Costumes are encouraged, but no masks.

Music from 11 KCRW DJs and live performances – Edward Sharpe and the Magnetic Zeros, Little Dragon and Sea Wolf – will fill the five dance rooms at this historical Elk Lodge now known as the Legendary Park Plaza. Arrive hungry because you can munch at the Kogi, Border Grill, Coolhaus and Sprinklesmobile trucks.

Spend two hours watching magic tricks that vary from escape and ESP to levitation and sleight of hand, performed by a husband-and-wife team. Guests receive a complimentary candy eyeball and soda; every woman receives a black rose and every man gets a fortune telling fish.

This massive party (65,000 in attendance last year) features dozens of DJs from around the world, including Armin Van Buuren and Felix Da Housecat, in four rooms of constant dance, strobe lights and playful debauchery. Get-ups are recommended; just make sure you can identify your friends when the costumed crowds roll in.

Try to stay in your seats watching vampires hunt and listening to live music from one of the world’s tallest pipe organs. Clark Wilson will play the soundtrack to the silent 1920s German horror film Nosferatu that was inspired by the novel Dracula. This classic shares the essence of vampires dead on.

Get blown away by live performances by Ben Harper, Linda Perry and Andy Summers alongside Silverlake Conservatory of Music’s co-founder, Flea from Red Hot Chili Peppers. This annual concert and auction will benefit the conservatory. Wear your costume and watch out for the neon skeletons because this party also celebrates el dia de los muertos.

Show up in your skimpiest to a costume ball with more than 100 Trashy Lingerie models. Dance to DJs on two floors and watch the Darling Stilettos, a female dancing and singing act with a rock band. Girls can show off their stuff and guys can be surrounded by beauty.