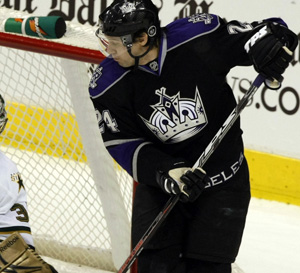 Maybe the Kings should reconsider trading away Alexander Frolov. Amidst months of rumors that he would be traded, many wondered if Frolov would have any hockey left in him in his remaining days in Los Angeles – especially after he was benched against Dallas Oct. 19. Yet, in three games since returning to the ice, Frolov has notched two goals and four assists; in his previous eight games, the left-winger scored just one goal and notched four assists.

His production has helped the Kings win three of four consecutive games and move into sole possession of first place in the Pacific Division (8-4-0, 16 points) entering this week’s play, which includes games at San Jose (7-4-1, 15 points) Oct. 28 and against Vancouver (6-5-0, 12 points) Oct. 29. Since losing at Columbus Oct. 17, the Kings defeated the Stars (twice), Coyotes and Blue Jackets to move atop the division, thanks to Frolov and Anze Kopitar (six goals, three assists during streak).

Los Angeles posts its second four-game winning streak of the season. The Kings won four in a row after dropping the opener to Phoenix, but then dropped three straight on the road before their current four-game run.

Meanwhile, things are not looking so hot for the Anaheim Ducks, who dropped three in a row and four of their last five games heading into this week’s games. Dropping to 3-5-1 (seven points) during the tough stretch, the Ducks set up camp in the cellar of the Pacific Division.

The Ducks are the only team with a losing record within the division, with Phoenix (6-3-0, 12 points) the closest team within Anaheim’s reach. Only Nashville (3-6-1, seven points) and Minnesota (3-7-0, six points) have worse records in the Western Conference.

Needless to say, the Ducks hope for a change of fortune this week, but with a groin injury to Jean-Sébastien Giguère and Evgeny Artyukhin serving a three-game suspension, their struggles may continue.