Arena Coaches Out of This Galaxy 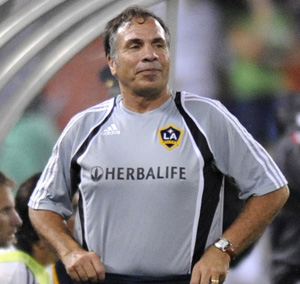 The Galaxy’s Bruce Arena is a strong contender for MLS Coach of the Year.
(Credit: Chuck Myers/MCT)

Oh what a difference one man can make. For the Los Angeles Galaxy, that one man is certainly not David Beckham.

While all eyes are on team ownership for spending some serious moola on the aging futból megastar it duly “borrowed” from that little European isle across the Atlantic Pond, perhaps everyone is wasting time looking at the wrong man. After all, since Becks arrived in Los Angeles, the Galaxy posted the two worst records in franchise history, going 9-14-7 (34 points) in 2007 and an even worse 8-13-9 (33 points) last season.

Alas, excitement was anew as the Galaxy took to the field for their final regular season home game Oct. 24. Rest assured, anyone who vociferously cheered for a man other than general manager/head coach Bruce Arena clearly was not paying much attention to what had been happening on the campus of Cal State Dominguez Hills throughout the 2009 MLS season.

For those of you who have missed it, here is the latest and greatest out of Carson: Arena has made a clear-cut case for MLS Coach of the Year.

In a season that started in turmoil, it took the steadiest hand on the sideline to make the unthinkable happen this season – take what was considered an average soccer team, at best, and return a once-proud franchise back to prominence. That was the job bestowed upon Arena when he was hired in August 2008 to replace coach Ruud Gullit and general manager Alexi Lalas, and Arena did not disappoint.

Of course, Arena says he was just doing his job.

“We’ve just been trying to do things tactically that make sense at a given point of the season to get us some points and results,” the coach tells Campus Circle, humbly rejecting the notion he should be this season’s Coach of the Year. “For the most part, we put together a much more competitive team compared to teams in the past. We’ve established ourselves where we feel we can give a good effort every game and keep us in a position to win.”

Yet, those around him understand Arena’s true value, especially current assistant coach Cobi Jones, who says Arena is responsible for the Galaxy’s drastic one-season turnaround.

“If you look at our standings last year as compared to now, I don’t think there is any other coach in the league that has much of an impact or drastic change to their teams. It’s logical for him to be Coach of the Year,” the former UCLA standout shares in an exclusive interview. “He creates an atmosphere where everyone believes they can flourish and do their job to the best of their abilities.”

One player who believes he will flourish under Arena’s tutelage is veteran striker Edson Buddle. Despite scoring just five goals in an injury-plagued season, Buddle says Arena’s ability to be a true X’s and O’s coach helps him learn the game from the inside out.

“He stresses watching [game] tape over and over and making sure we are tight on the field,” Buddle tells Campus Circle after a late-morning practice session in the shadows of the Home Depot Center. “He makes us realize that if we play together, defensively, we will win games, and with the results we have had this year, we tend to believe in him a little more.”

Indeed, the results even turn Becks into a believer, as the British midfielder makes an emphatic case for Arena’s Coach of the Year candidacy.

“We are more than happy with Bruce being our manager,” Beckham says. “He brought togetherness to the team and the players. He’s got so much experience in this country, in this league and in this game. We’re lucky to have somebody like that.”

The Galaxy is certainly lucky to have Arena. As the playoffs near, the AEG-owned franchise hopes some of that L.A.-sized luck is strong enough to carry the squad all the way to an MLS Cup victory in Seattle Nov. 22.

The Sports Wanderer
Welcome to the Pacific-12
44,612 views

The Sports Wanderer
Gagne With the Wind
2,112 views

The Sports Wanderer
Godzilla Dons Halo in The Bronx
2,206 views

The Sports Wanderer
Jerry Busses to the Famed Hall
2,072 views

The Sports Wanderer
Get Rid of the Clippers
2,509 views

The Sports Wanderer
A Bleeding Heart for Vinny
2,913 views

The Sports Wanderer
No Angels In This Bracket: 2010 March Madness
2,053 views

The Sports Wanderer
Kobe Opting Out of Los Angeles
2,064 views