Her Fearful Symmetry: A Novel 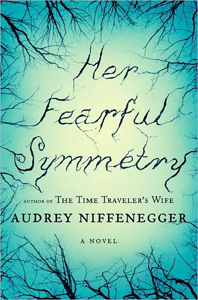 You’re probably looking at the name Niffenegger and wondering why it looks so familiar (And if you’re not, you should be!). What with a movie adaptation of her debut novel, The Time Traveler’s Wife, having been recently released, now seems like the perfect time to drop her second novel, Her Fearful Symmetry.

Twins Julia and Valentina Poole live in sleepy suburban Chicago, and apart from being rather overly attached to one another, lead relatively happy lives. That is, until they receive a letter informing them that their mother’s estranged sister, the late Elspeth Noblin, has bequeathed her London flat and a rather large sum of money to them. In the course of their residency in Elspeth’s flat near Highgate Cemetery, the twins learn about themselves and their neighbors, both in and out of the graveyard.

Written in the same beautiful, intimate-yet-sassy style as The Time Traveler’s Wife, Niffenegger has once again created a novel that is as affecting as it is beguiling. Rest assured that although it is stylistically similar, Her Fearful Symmetry is a on a completely different track than Niffenegger’s previous work. The novel is set in a darker world, and while some readers may still find the writing a touch melodramatic, this book should be celebrated; it’s a well-crafted story.

Her Fearful Symmetry is currently available.