The Hunches: Yes. No. Shut It.

(In The Red)
By Paul Gaita 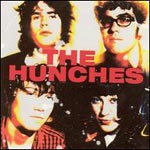 As everyone from John Zorn to the Butthole Surfers will tell you, noise (or dissonance, if you wanna get arty) can be an extremely effective tool for musicians, allowing them to express extreme emotional states with the punishing force of feedback or atonal chords. Noise can be like nitroglycerine, though——if not handled properly, it can do considerable damage to the handler (just ask Lou Reed). Portland, Oregon’s The Hunches sound like they’re dancing in the minefield from the opening squall of "Murdering Train Track Blues," the first track from their debut CD. Frontman Hart Gledhill yowls indecipherably into the band’s hurricane-strength sonic assault, which is less driven than pursued by drummer Ben Spencer’s speedfreak beat. It’s loud, to be sure, and frantic, but it’s not particularly novel——the late Oblivians did the punk-blooze thing better, as do the Hunches’ labelmates the Horrors——or listenable. But later in the set (the album is a live recording with overdubs) comes the ruminative "Lisa Told Me," which rustles up the ghosts of Johnny Thunders and Doug Yule-era VU with its raw but heartfelt grind. This sea change, which carries over to "Let Me Be" and "Oh Woe Is Me," helps to paint the Hunches as a band with more than one speed in their gears, and makes such subsequent bomb blasts as the ferocious "Accident" (which features some fine use of a Hoover vac) more palatable. Hard to say if the Hunches should stick with the faux blues-noise or direct their limitless energy towards the more melodic stuff, but for now, it’s good to hear a band that can deliver both with equal drive. Grade: B+
Article posted on 6/18/2004
This article has been viewed 1706 times.