Michael Jackson’s This Is It 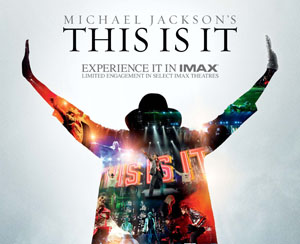 This Is It – the concert film for Michael Jackson fans in IMAX. It is, in essence, the entire concert that Jackson was planning to perform for a sold-out run in London’s O2 Arena this past summer … had he not died. Director Kenny Ortega, of this film and the stage show, is also Jackson’s creative partner and seems to be his rock, helping him get what he wants and needs from the entire creative team.

We get to see Jackson in many outfits on many days of rehearsals, mapping out his choreography, vocals and interaction with the other dancers and musicians. At 50, he seems to be tireless in his pursuit of perfection and ability to perform the moves he popularized decades ago.

As the other members of the production weigh in on the legend, from a dancer from Australia that was picked out of thousands from the auditions, to the female rock guitarist, it is obvious what a profound influence Jackson has had on so many. He is described as a person who knows his music intimately and who is incredibly gentle and supportive. This is evident by the amount of times he uses the word “love” and says “God Bless You” to others.

The viewer isn’t let into the world of a miserable child star or a drug addict. We don’t get to see his “weirdness” or eccentricity, beyond his grotesque amount of plastic surgery. Instead, we see him pop and lock, body wave, moonwalk and express himself better through movement than he ever did with words. When he performs classics like “Billie Jean” and Thriller,” the audience hoots and hollers. After many numbers in the show come to an end, the audience erupts into applause - because of his sheer talent and the powerful 14000 watt digital surround sound IMAX system. Everything sounds so crisp!

Whatever he did in his personal life and whatever problems he had (and there seemed to be many), this is not the movie for those looking for the man behind the scandal. This is for the fans and artists whose life Jackson changed; the music lovers who will remember Jackson for his big heart, gentle soul and conscious mind – or, for what he really was: a dancing machine.