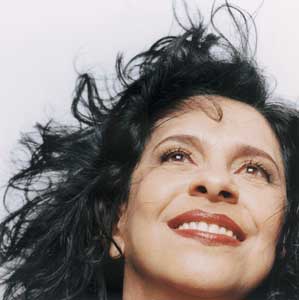 The cavernous stage of Royce Hall was turned into an intimate living room setting when Brazilian music icon Gal Costa graced the stage with her longtime friend and fellow bossa nova legend Oscar Castro-Neves. With Neves on guitar and sometimes piano, the two performers dazzled the audience by doing little more than relishing in the music they have loved for more than a generation.

It was Neves who explained to the audience the unique format of the show, which was supposed to feel like the listeners were guests in a home. Rather than simply a sampling of Costa’s many hit recordings, the playlist consisted of songs that had been especially meaningful and influential in the singer’s life. Classics like Antonio Carlos Jobim’s “Desafinado,” “Wave” and “The Girl from Ipanema” were given a fresh treatment while staying true to the essential balladic character noteworthy of bossa nova.

The pleasure Costa and Neves derived from playing and singing proved irrepressible and infectious. Their onstage chemistry spoke of many years of affection for one another and an abiding love for Brazilian music.

Both performers achieved fame in the new Bossa Nova movement just as it was burgeoning in the early 1960s. Their onstage personas embody the same sort of gentle tenderness found in the genre.

One of the many interesting moments of the show came when Costa sang the famous Casablanca ballad “As Times Goes By,” giving it a touch of bossa nova or rather bringing out the bossa nova flavor already embedded. It was a moving rendition that inspired raucous applause.

Costa’s interactions with the audience offered more highlights as the crowd was packed with Brazilians and Brasilophiles who knew the words to the songs by heart.

Also featured in the playlist were some favorite Samba classics, including the obligatory “Brasil.” Costa’s body language showed a clear shift as she spiced the songs with Carmen Miranda-esque gesticulations. These types of flourishes helped give the show a spectacular quality that reached a climax with a speedy samba tune played at the close of the evening. In this fiery number, both Neves and Costa demonstrated why they are royalty in the Brazilian music world.