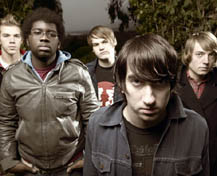 Picture this: An 80,000-capacity arena is tightly packed with eager fans anticipating the arrival of their favorite band. As the lights dim, you and four other bandmates step onstage and prepare to rock. The lights begin to rise and the cheers get louder and louder. As the music begins to play, you look out into the audience to see your fans singing along to each and every one of your songs. It gives you a huge adrenaline rush.

When it comes to the Plain White T’s, the bigger the better. And the more the merrier.

“Have you seen those Michael Jackson concerts, where huge arenas are packed with thousands and thousands of people?” singer Tom Higgenson asks, alluding to the band’s ultimate high. “Even if we could be the opening act for one of those shows, that would be amazing.”

Always pushing for more, the Plain White T’s have been taking steady strides toward fulfilling their goals. Even though the band still has a way to go before reaching Beatles-like success, constant touring for the past three years has kept the Plain White T’s concentrated on the moment.

Since ending an in-store acoustic tour, the band returned home for a short visit and then embarked on the Take Action Tour, helping to draw awareness to teen suicide.

This particular tour was something close to their hearts with members of the band feeling honored to be a part of it, having lost a friend to suicide.

“A big problem with a lot of kids who are depressed is that they feel alone and they feel isolated, like they don’t have anyone to talk to. [Suicide] is something that everyone goes through, whether it’s through themselves, through friends or someone they know,” Higgenson says.

“To be a part of something like that– to raise awareness and to give kids something to feed off of – is just awesome. This tour is just to let them know that everyone goes through it, and there are places and things that you can reach out to.”

The band began in a Chicago basement in 1997 playing cover songs, but it wasn’t until Higgenson began writing his own songs that they became known as the Plain White T’s.

In January, the Plain White T’s released their sophomore effort All That We Needed, which has since received a generous response. Higgenson says his main focus of the album was just to make music he liked.

“I like music that sticks with you and grows with you over time – like Michael Jackson or The Beatles – just classic stuff, that will be just as good in 20 years as it is now,” he says.

The Plain White T’s often find that fitting in with current music trends or scenes is a difficult task.

“[Our music] is a little simpler and less complicated [than much of today’s current music], but I think that in the long run it’s going to do us good.”

Much of the inspiration behind All That We Needed comes from personal experiences the band has been through. The album focuses a lot on experiences with women.

“I try to write about a lot of things, but girls have a lot to do with it,” Higgenson says. “Love is the most important thing in life, whether you want to admit it or not, so I tend to write a lot about it.”

Higgenson says he would love to find a girl with that “special something,” but touring often hinders his relationships.

“There are things that you need to go through to know that you’re going to be with that person for the rest of your life,” he says. “That is why meeting people and being on the road all the time makes it impossible to start or build anything.”

Due to their non-stop traveling, the Plain White T’s are experts when it comes to knowing how difficult life on the road can be.

“I don’t think that people really realize how hard it is ’cause it’s like, you’re in a band and you’re traveling the country. But it’s 24 hours a day that you have to be working, whether it’s driving, playing, loading or selling merch,” Higgenson says.

“It’s hard but awesome at the same time; you miss your friends and family. But the more we tour the more friends we make, so it’s almost like being on tour is still like being with all your friends.”

Despite the downside of touring, the Plain White T’s will continue to tour until the winter. They will be soon be starting a U.S. co-headlining tour with The Matches, and will continue onto the Warped Tour for a couple weeks before setting out on yet another tour with Midtown.

Most importantly, the Plain White T’s will continue to pursue their dreams.

“Success is what you make of it,” says Higgenson. “If we just keep doing what we’re doing, I think we will keep getting a little bit farther and farther up that ladder. After all, the sky’s the limit.”

All That We Needed is currently available. For more information, visit www.plainwhitets.com.