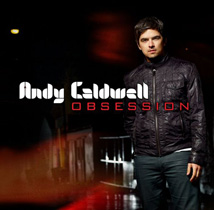 For over a decade, world-class DJ/producer Andy Caldwell has set dance floors ablaze with his energetic sets. The L.A. resident gained credibility with his wealth of remixes and original tracks on the respected house label Om Records.

On his sophomore album, Obsession, Caldwell takes a new direction with his music, venturing into the electronic pop realm – a far cry from his usual funky and jazzy house sound. Sadly, half of the tracks on Obsession sound forced, unnatural and generic.

However, Andy does serve some heat on bass thumping “It’s Guud” featuring Mr. V and “Put Me in the Mix” featuring Mr. J Madeiros. The album’s first single, “Black Diamond Sky,” is another club-worthy track, despite the unpleasant vocals and cheesy lyrics.

It’s not uncommon for artists to try new things, but in this case it simply didn’t work out as well as it could have – especially considering Caldwell’s musical potential.