Shadows Fall: Wages The War Within 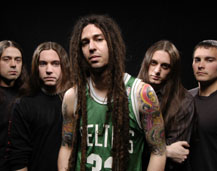 Renaissance. Thrash metal. Two phrases not usually paired with one another. One conjures images of Italian men in funny hats exploring nascent sciences and the other evokes bleeding ears, stacks of amplifiers, torn blue jeans and, of course, long hair, flailing about with reckless headbanged abandon.

It’s been a while since metal known as thrash was in any way popular among the young masses. It appears, though, that the sore necks have healed and the world’s youth is once again ready to take on a style of music brought into its own by legendary bands like Metallica, Megadeth, Slayer, Testament and Anthrax to name just a few.

With 180,000 copies of their latest album, The War Within, sold and counting, Shadows Fall has cast aside conventional wisdom regarding metal album sales, and with an ever-expanding fan base made up increasingly of younger fans, is bringing an almost forgotten style of music to first-generation listeners.

“I think there’re definitely some kids that weren’t there a few years back. It’s not just a bunch of underground fans. There’re definitely some fans of more mainstream metal bands, and … this is their first exposure to things like this. It’s cool to see it’s starting to reach out to where kids can actually get the stuff they may not have known existed,” says bassist Paul Romanko.

When the facts are taken into account, it’s not surprising that the band’s fan base is getting so large. Ozzfest 2003, a two-year stint at Japan’s Beast Feast, the 4th Annual Take Action Tour and co-headlining the MTV2 Headbanger’s Ball Tour with Killswitch Engage and Lamb of God enabled Shadows Fall to become the first Century Media group to break 100,000 albums sold with their previous release, The Art of Balance.

But for all the success that seems to be hurtling headlong into their laps, one gets the distinct impression that, despite it all, the members of Shadows Fall remain uncommonly humble. When asked what sets Shadows Fall apart from other bands, “I have no idea,” says Romanko. “I don’t know about ‘leaders of the thrash renaissance,’” he adds, referring to the title bestowed upon his band by CMJ New Music Monthly. “There’re so many good bands out there … we just kind of do our thing. We just never thought this would happen in our lives.”

Before you go thinking that Shadows Fall has sold out to achieve its popularity, give a listen to The War Within. It’s clear that the popularity is just a nice fringe benefit.

“As long as you’re writing what you want to write, you can’t control what people are going to think about it on that level,” Romanko explains. We’re not consciously trying to do something [mainstream], that’s not us. [But] when the mainstream comes to you, what are you going to do?” he says.

The answer to that question lies in the band’s actions. Having finished a tour in Australia and Japan and recently embarking on yet another U.S. tour, it’s clear that Shadows Fall has taken popularity and turned it into momentum. As for future plans, however, the bassist’s ubiquitous modesty makes it hard to discern what’s on the horizon.

“I don’t know [what’s next],” says Romanko, “We’ve already accomplished everything we ever thought we were going to do … let’s just see what happens.”

It seems like Shadows Fall can’t fail. From their music to their modesty to their insistence that at least one member has a hand in every aspect of the band, these guys seem to have it made. And as the ghosts of thrash continue to awaken and possess a new generation of fans, Romanko, Fair, Donais, Bechand and Bittner will be charming their way onto the list of thrash legends.

The War Within is currently available. Shadows Fall will play the main stage at Ozzfest 2005, which makes its way to the Glen Helen Hyundai Pavilion on Aug. 20. For more information, visit www.shadowsfall.com.