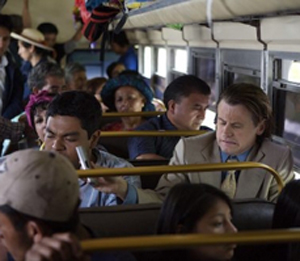 Retired, worn out movie star moves to another country to hide from Hollywood, and Hollywood, in true form, goes looking for him eventually. It’s tiresome, really.

While watching this film I knew I should have been listening to the title and looking for Palladin like I would look for Waldo. But Waldo at least wears a weird outfit and travels to exotic places. Two-time Oscar winner actor Jack “Jake” Palladin escaped to poverty-stricken Guatemala to work as a cook in a beat-up restaurant. There’s really nothing funny about that.

It’s the job of arrogant Hollywood talent agent Josh Ross (David Moscow) to track him down to offer Jake tons of money for a small part in a remake of a big Hollywood blockbuster. Josh expects to fly in, and then fly directly out of Antigua, the small colonial town where Paladin supposedly lives, in just a few hours.

However, the locals decide to make the trip much harder on the big shot talent agent who jumps from barbershop to shoe repair shop to police station and finally to the post office. No one will spill on the whereabouts of the elusive Jack Palladin.

As it turns out Jack, who goes by Jake when he isn’t acting, is a cook at Café Viejo, a popular hangout in the small town. As things fall into place, Josh’s quickie trip south turns into a vital deal that he must make to ensure financial survival.

Josh eventually discovers the real Palladin and presents him with the opportunity to make a comeback on the silver screen. The pair goes back and forth until both are able to confront their past: Josh’s mother was once married to Palladin, who has information about her death that Josh wants to know.

In the end, both reach a mutual understanding: They are merely men looking to block the glare of Hollywood and savor the important parts of life.

As much as I wanted to like and laugh at this movie, I couldn’t find the energy to do so. The plot is poorly built, and the jokes are few and far between. The cast is fairly capable, but there is not enough star power to keep the story alive and running.

Sadly, with the lack of character motivation and comedic scenes, Looking for Palladin quickly turns into “Find Him and Get It Over With.”