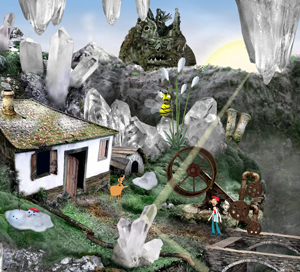 The vibrant world of “Axel & Pixel”

Each new entertainment medium has its own visionaries who see their new venue as more than just a gimmick to offer escapism. Whether they are independent animations, graphic novels or experimental films, artists are always trying to evolve their craft into something respectable. Ultimately, even if their attempts are met with scorn and derision, it is the work of these visionaries that helps to shape the landscape and ultimately even the mainstream of the genre.

Video games are no exception to this rule. This last month saw the return of IndieCade, the yearly celebration of independent gaming that showcases some of the best and the brightest of those who see games as more than just games. These titles ranged from interactive storytelling to full-scale games, but they shared a passion for creating something that was new, intriguing and uniquely theirs.

In addition to these, there is a thriving community of independent online developers. Together, they have made an impact on gaming that has not gone unnoticed through the industry.

Perhaps the most recent direct translation of this attempt to make gaming into something artistic is the Xbox Live Arcade title “Axel & Pixel.” This mostly point-and-click adventure marks one of the first showings of an already popular independent gaming movement from the Internet to a console. Like many similar online titles, the game forgoes deep gameplay mechanics in favor of a gorgeous gaming experience.

“Axel & Pixel” offers a simple storyline – an artist and his dog traveling through a dreamland – and an amazingly complex visual style. The world is a vibrant mixed-media art installation that ranges from moving illustrations to cleverly placed found object elements. The end result is a familiar gameplay dynamic where you have to activate items to clear paths and solve puzzles, but the world is the truly memorable triumph of the piece.

If “Axel & Pixel” is an attempt to bring art into gaming, “Borderlands” is an unlikely but notable achievement in honoring the art that goes into gaming. In the attempt to make a stylish RPS (role-playing shooter), the designers of the game realized that the quirky story, world and characters in this mercenary treasure hunt on an ultraviolent planet deserved an equally quirky art style.

So, rather than trying to make the concept art more realistic, they painted their world to look more like the original concept art. The result was a world of vibrant colors, obvious cross-hatching and edges that look like they came from an artist’s pencil.

The game itself may not be as innovative as the art style, but “Borderlands” is an addictively violent shooter. As one of four skilled mercenaries, you have to navigate a world of brutal monsters, slack-jawed psychos and weapon-dispensing vending machines in search of the treasures of the fabled Vault. The gameplay is perhaps too familiar (to the point that it wouldn’t be unfair to call this a less-serious “Fallout 3”), but the world is both unique and wonderful, offering both friends and foes who exude character both through their design and their subtle quirks.

Another way that gaming has evolved is that the fan base has grown so massive that it has spawned its own culture. “Half-Minute Hero” is a wonderful (if easy-to-overlook) PSP gem that manages to take a Warhol-esque look at nostalgic gaming.

This skewed look back at a simpler world of 8-bit gaming seems to revel in its self-aware commentary on the clichés of the RPG genre. “Half-Minute Hero” also loves to taunts players by putting blocky, almost unrecognizable characters in front of gorgeously illustrated backgrounds.

The gameplay of “Half-Minute Hero” is another unique take on role-playing games. While the typical RPG may take over 40 hours to complete, each challenge in each of the game’s many modes has a 30-second timer.

While you can purchase more time and bend the rules, the essence of the game is that you must meet the villagers, equip your hero and face an evil that is attempting to doom all existence within the span of mere moments. The end result is a series of simple yet deep mini-games that offer as much combat, puzzle solving and storyline as many major RPGs.

These are just a few examples of new games that have grown from the innovations of a vibrant and ever-expanding gaming art form. Sure, there will still be new “Madden” and “Halo” titles each year, but it is nice to know that even large companies are fighting to elevate the medium.