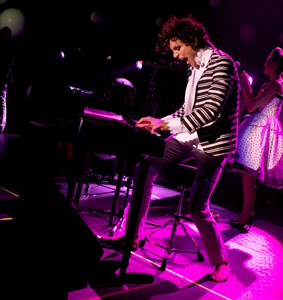 It was about time that someone brought back a little theater to the rock stage. At the show’s start, the stage was decorated as a mock ’50s living room, complete with a custom newscast about the first space launch going terribly wrong. Then as the scene ended in horror, the lights came up, the band took their instruments and Mika entered in a space suit, stripped it off and kicked off the show.

From that moment on, the crowd and band were one, bouncing back and forth from song to song. At one point, Mika brought out plus-sized, neon-colored girls to dance along to his hit “Big Girl.”

The Palladium was a riot of smiling faces. This was one of those rare moments in Hollywood where everyone at the show was having a good time. No egos, no status, just music.

For a British act to come to the States and have this kind of following was nice to see. The audience sang along to all the songs, not just the few that have graced the radio. The push and pull of energy from the stage to the fans was the biggest attraction at this event.

The big debate that Mika was singing to a tape all night and not using his own voice should be put to rest. After standing right in front of the stage and taking photos for part of the night, I could clearly hear the rawness of the band and the music, vocals included.

Yes, there was a backing tape to supply the orchestra and other effects that couldn’t be brought on a tour like this, but one thing is for sure, when you go to a Mika show, you get the real thing. His voice is truly a work of art.