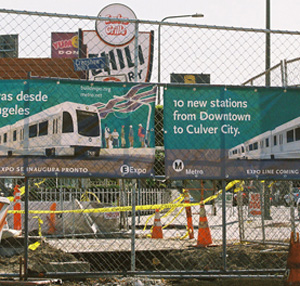 Changes are in the works for the Los Angeles County Metro system.
(Credit: China Bialos)

Much of the plan is guided by Measure R, which leaves a one-half-cent sales tax increase to Los Angeles County for the next 30 years (bringing it to a steep 9.75 percent), and through 2040 will see the bulk of sales tax earnings, an estimated 35 percent – $13.79 billion – spent on new rail and/or bus rapid transit capital projects. Additional funding will come from the American Recovery and Reinvestment Act of 2009 (ARRA).

With Measure R only providing a fraction of monies required for upcoming projects, which Metro estimates will require a grand total of $298 billion over the next 30 years, we are left to see how much of the costs are covered by federal or state funding sources, versus new increases to those who rely on the transportation being expanded. According to the Los Angeles Daily News, the Bus Riders Union anticipates a cost increase on monthly single-zone Metro passes, “from $62 to $88 by 2015,” as well as on daily passes, from $5 to $7, though Metro will likely postpone fare increases for a year and maintain the current fare rate over the next five years “for seniors, students, the disabled and Medicare recipients.” The Daily News says the LRTP would affect approximately 500,000 bus riders.

Overall, the LRTP anticipates that $106.5 billion will be spent on bus and rail operations, while $94.4 billion is intended for highway maintenance and improvements. New carpool lanes are to be built throughout I-5, I-10, I-405 and I-710, but the bulk of funding, which will be used to support the growth of public transportation in Los Angeles County, is intended to accommodate the County’s population growth, which expanded by 144,222 new households between 1990 and 2000 (Source: CensusScope.org).

The much-talked-about Subway to the Sea, planned to run along Wilshire Boulevard from Wilshire/Western to Santa Monica, was once again pushed by Mayor Villaraigosa and thus far has only been approved for extension to Westwood, with stops at Fairfax and in Century City. In addition to the backing for an extension to Santa Monica, Jody Litvak, a regional representative for the Westside Subway Extension, and chief planner David Mieger, have been conducting town hall meetings for West Hollywood residents to discuss the possibility of a Pink Line, which would connect the theoretically expanded Wilshire line to the Hollywood/Highland Red Line Metro station (WeHo News). A town hall meeting to discuss the possibility of a Pink Line placement was held on Nov. 3.

Is there action to follow all this talk? Yes, in fact; Nov. 15 will see the grand opening of eight new Gold Line stations, expected to serve 13,000 riders in its first year. All components of the Eastside extension, five years and $898 million in the making, are accessible to Downtown’s Union Station, beginning with an initial Gold Line station in Little Tokyo and ending with the Atlantic Station, near East L.A. Community College.

In 2010 there will also be an Exposition Light Rail Train connecting Downtown Los Angeles to Culver City, a segment for which $315 million in state funding had been secured and ground first broken in 2006. Beginning at the 7th St./Metro station, the Expo Line will run southwest to USC/Expo Park and then west, along Exposition, in order to parallel and relieve I-10, with stops in Baldwin Hills and Culver City, ending its route at Venice/Robertson by the end of Phase I. Phase II proposes stations running through Santa Monica and will allegedly begin construction in 2010.

Also in the works is a High-Speed Train (HST) planned to run between Union Station and ARTIC in Orange County, which will provide Los Angeles residents easy access to Angel Stadium, the Honda Center and Disneyland in approximately 20 minutes. Thus far, Metro is seeking public funding for the HST, which has secured $8 billion from ARRA and, in the long term, will see Los Angeles as a stop between San Diego and San Francisco or Sacramento (split routes are planned).

By 2040, this would allow a commute between San Francisco and Los Angeles to run a mere $55, with a travel time of two and a half hours. With stops at UC Riverside, Merced and Irvine along the way, a HST would also make it feasible for students to attend state universities while commuting from home to save money. This is in addition to the expanded Metro system within Los Angeles County, which will provide greater job accessibility between those parts of town with higher employment possibilities and those without.