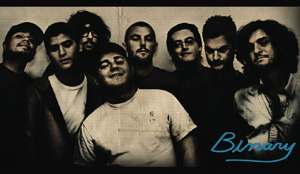 It was a momentous event for Kyle Petersen, 25, and Josh Legg, 26, to see all seven of their artists play live onstage at the Echoplex. In the background, a large, blue neon glow illuminated the word “Binary,” the record label the duo created in 2008.

This show would be a milestone for the label as it introduced Binary’s debut album entitled, Binary Presents: LA Lights. Released digitally worldwide on Oct. 13, the album is a compilation of seven L.A.-based DJs and producers: Alfa, Fabian, Keenhouse, LexiconDon, Short Circuit, the Kids are Radioactive and Legg and Petersen’s own band, Nightwave.

With a collection of artists and music producers creating and remixing smooth symphonic funk with the hard edge of electronica beats, Binary’s chief inspiration comes from the romanticism of L.A. sunsets, and cool nights driving past palm trees. A feeling and sound the duo has coined as “Dreamwave.”

In first setting their sights on indie bands, Binary’s creators soon discovered the effect of electronica after witnessing a live Daft Punk show in 2007. It was a moment they described as emotionally powerful.

“Just the sounds you can make and the amount of control you have over the sounds that are literally coming out of the speakers and entering your body is incredible,” says Legg.

The effect of the flourishing indie scene of Los Angeles’ Eastside, that includes Echo Park, Silverlake and Los Feliz, had its affect on the two recent USC grads who moved to Los Angeles from Chicago and Boston. The Eastside neighborhood introduced them to a community of emerging DJ-centric producers, including Fabian, whose work centered around hip-hop beats and who was the first to sign under Binary’s label. The record label soon brought in other L.A.-based producers to help Fabian with his career.

“The group then began collaborating and helping each other in experiencing this new sound together,” says Petersen.

Legg reveals, “What we didn’t realize with the artists we were bringing into the family was that we would fall in love with them. Within a few months, we had signed seven artists.”

The creation of Binary was a long process for the two graduates since each of them had no prior experience in artist management. Legg graduated with a degree in Psychology, and after college Peterson found himself doing data entry at Chrysalis Music Publishing.

There he learned “the value of the song” and a new application of creating management deals with artists. Binary would focus on publishing and merchandising rights, as well as on live shows that featured a more band-like performance rather than simply a DJ onstage.

“Dance music is not raves, drugs and glow sticks,” says Legg, who is proud to see Binary artists utilize live sets and musical instruments such as saxophones during their shows.

Binary’s business model will act like an overarching umbrella, where underneath they have the ability to release records, provide merchandizing and take advantage of publishing rights while also giving the flexibility for other labels and companies to use their artists and join in on the revenue stream.

Realistically, the guys at Binary admit they will never see record sales as an avenue to make money.

However, Legg remains positive: “Binary will sell one record in every country in the world. Just that thought alone is really cool.”

With the music industry going through a complete transition, Legg explains the value of Binary’s business model.

“Because people can get music for free, the value of the recorded song has gone down,” he says, “but that doesn’t mean that people are less interested in the music.”

In the hopes of creating a catalyst for buying the record, Binary released four of the 14 tracks to differing blogs and music sites, including 30 different remixes in circulation and free for download.

Already, bloggers have created a buzz around Binary’s new album, with one review citing, “Oh dreamwave, you sexaliciously luscious beast of a genre,” from SheenaBeaston.com.

Out of their small laid back office on Melrose Avenue, the creators of Binary plan to continue touring and promoting the musical idea of ‘Dreamwave’ as “positivity, friendliness and good music. An experience of hanging out with friends and having a good time,” says Petersen.

Adds Legg, “It’s easy to forget how cool our city can be. We want to show the world what L.A. is all about.”