Shwayze: Bigger, Better and Stronger Than Ever 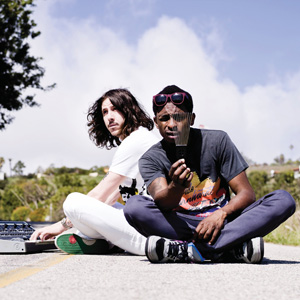 With no reality show to spearhead the release of their second album, the unlikely pair of Aaron Smith and Cisco Adler – better known as Shwayze – are hoping their latest release, Let It Beat, is exactly what the fans ordered.

“It’s not just a repeat of the last album,” says Adler. “It’s still the same ingredients, but it’s just a couple different dishes on this one.”

The summer anthem “Buzzin’” paired with the infamous ode to the band’s drink of choice “Corona and Lime,” carried Shwayze’s self-titled debut into the Top 10 album charts and earned the band a coveted spot on the Vans Warped Tour. Now, the hipster duo is ready to give their fans a whole new sound with their sophomore release.

“The last record was pigeonholed as one thing – the summertime beach thing,” says Smith. “We didn’t want to just be known as that one band when we know we can do a lot of things. For this record we have some upbeat songs, some mellow songs, we have everything for every emotion on this record.”

The first single “Get U Home” – a club-thumping dance track laced with Adler’s seductive vocals and Smith’s natural flow – is a perfect segue towards the band’s new direction.

“We wanted to take it a few different places and show people the range that we had,” says Adler. “It’s not just a repeat of the last album. We wanted to grow as artists, and we wanted our fans to grow.”

The new album is fueled with exciting collaborations from some of the band’s favorite artists and friends, including Ric Ocasek from the Cars, Snoop Dogg, New Orleans hip-hop duo the Knux, Darryl Jenifer (bassist from the legendary punk band Bad Brains) and the E Street Band’s Roy Bittan.

“It goes again to show how well-rounded this record is,” says Adler. “If you look at the features, it’s like we didn’t go in one direction at all, we went with several people from several realms of the music world.”

While most of us don’t have Snoop Dogg on speed dial, Shwayze is fortunate to have a number of chart-topping musicians in their little black book of collaborations.

“Everyone that’s on the record are homies of ours,” says Smith. “We either try to build a relationship or we’re just fans of what they do. In some cases we were fortunate enough to have the pull to give artists like Snoop Dogg a call and be like, ‘Hey, do you want to be on our record?’”

“Crazy for You,” a track Adler co-produced with Ocasek featuring Jenifer on bass, is an alternative love song.

“It’s a Weezer-esque song,” says Adler. “We were actually looking to get Rivers [Cuomo] but he was away in India on a three month retreat. Our manager, who had worked on the Weezer records was like, ‘what about Ric Ocasek?’ I’m a Cars fan to the death, so I was like, ‘yes, are you kidding me? Call him.’ Ric was like, ‘come out to New York, and let’s do it.’ It was as simple as that.”

In addition to Let It Beat, Shwayze is also planning to release a Get U Home remix EP with Paul Oakenfold, Travis Barker and LMFAO.

“That’s another way that we show range as far as who our friends and fans are, who wants to get down with the cause and show people we’re not just from one little corner of the world,” says Adler. “Our music has a wide appeal.”

However, in Shwayze’s case, it may be a small world after all. Smith grew up with Sky Blu of the electro-pop group LMFAO in the Pacific Palisades.

“LMFAO have been our boys forever,” says Smith. “It’s a small scene in L.A. We’ve actually watched them come up. It’s really good to see a group like that blow up because they’re like family.”

“We just decided to jump on our boys’, LMFAO’s, tour as special guests and go out with them until Dec. 20,” says Adler. “We like to keep it in the family.”

After conquering the charts and graduating from the reality TV realm, Shwayze is planning on conquering the big screen. After the holidays, Shwayze will step in front of the camera in January to film Get Jack’s Tickets, a buddy-comedy following the two’s antics as they try to score Jack Nicholson’s highly-coveted sideline Lakers seats.

“We’re making our debut on the big screen,” says Smith. “It’s the first of many.”

And the guys are already planning the flick’s soundtrack.

“We’re already thinking the soundtrack will be the album in between Let It Beat, and the next one,” smirks Adler.

Let It Beat is currently available. Shwayze will perform Nov. 7 at the Palladium. For more information, visit shwayze.com.