The Bravery: A Happier Way to be Pissed Off 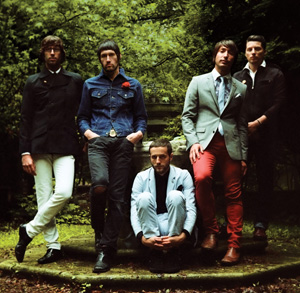 The Bravery will preview songs from Stir the Blood at the Wiltern Nov. 5.

Modern rock radio is polluted. It’s becoming crowded with limited shelf life bands that get too much attention, but one band that deserves its recognition is the genre-bouncing Bravery, who make excellent use of juxtaposition with its new release, Stir the Blood.

“Everything was a party with [The Bravery], and [The Sun and the Moon] was all over the map,” explains frontman Sam Endicott. “[Stir the Blood] is mostly back to dance rhythms, but there are some slower songs.”

If the Bravery could be described in one word alone, it would be consistent. Their ever-changing sound, from the post punk resurrection feel of their self-titled debut to the raw rock ’n’ roll nature of their sophomore hit, The Sun and the Moon, has nearly made the Bravery a household name instead of another casualty of the dreaded sophomore slump.

Overnight success they are not, but notoriety found them quicker than most bands this decade. Their paradoxical approach to sad songs with happy beats is captivating and before you know it, you’re playing air guitar/bass/drums and singing way off key.

Stir the Blood capitalizes on the dark and angry material Endicott wrote after touring for The Sun and the Moon. Songs like “Hatefuck,” “Red Hands and White Knuckles” and “Slow Poison” illustrate the new direction of the band.

“I constantly write down words, and a month later, I’ll read them and notice these themes,” Endicott recalls. “I write it over and over again without realizing it, and they seem to become songs.”

“I think that [Stir the Blood] is more like [The Bravery] in that we used a lot of synthetics,” Endicott points out. “However, it has a wide range of style that came from what we learned along [The Sun and the Moon.]”

Endicott and company made the trip to Woodstock in upstate New York to record in an abandoned church that looks like a set out of a horror movie.

“It had a Blair Witch vibe to it, very spooky,” recalls Endicott. “I’m really hoping it wasn’t haunted.”

“I wanted to be in the middle of nowhere and go somewhere where we could live and make music all night and day,” Endicott says. “Cover the clock and windows and go.”

The result is an album full of anger and broodiness all wrapped up in an up-tempo package. The songs might seem lighthearted on the surface, but underneath the music lies lyrics like, “No tenderness/I will show no mercy for you/You had no mercy for me/The only thing I ask/Love me mercilessly,” on “Hatefuck.” It’s clear this isn’t the same band that sang about a swollen summer.

“Michael Brauer, our mixer, said ‘Your songs are happy from the waist down,’” Endicott smirks. “That’s the thing about the Bravery. It’s our sound. We make sad-happy music.”

Mastermind might not be the word for Endicott’s role in the band’s affairs, but he is definitely the leader on and off the stage. He co-produced their debut, re-interpreted The Sun and the Moon for re-release, directs videos and oversees remixes. Endicott has shaped the Bravery. For Stir the Blood, he handed over the creative reigns to John Hill, whose producing credits include Shakira and M.I.A.

“[Hill] knows how to create these very unusual textures and landscapes that add a lot to this record,” Endicott explains. “I would leave for the day and come back later, and he would add all this crazy shit.”

The experiment is shaping up to be a success. The Bravery embarked on a small tour in October to build anticipation for the December release and road test the new songs.

Most artists resist the temptation to play a majority of their album for fear of leaks and poor first-week sales, but not Endicott.

“I don’t care. Most people don’t pay for music,” Endicott says. “It’s not about squeezing people for their money. It’s about trying to get the music out there.”

Stir the Blood will be available Dec. 1. The Bravery will perform Nov. 5 at the Wiltern. For more information, visit thebravery.com.