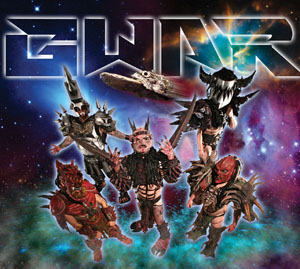 Nov. 16 is your chance to Meat and Beat GWAR.

Lovable metal monsters Gwar are celebrating their 25th anniversary this year, and they’ve also recently unleashed a new album entitled Lust in Space. Now the band has announced that they’ll be furthering the celebration by holding special “Meat and Beat” sessions at selected tour stops including their Nov. 16 show at the House of Blues.

Head monster Oderus explains the meat-and-beat thusly: “Certain specially-selected fans will be presented with a commemorative tour program that shall be autographed in their worthless human presence by all five band members.”

Less ominously, Oderus continues, “This is actually an opportunity for Gwar to take the time to personally express all of our appreciation to our loyal fans who have kept us rocking for twenty-five years.”

To have a chance to “meat” the band, check in at the Gwar merch table when you get to the show.

The Woodie Awards Need Your Vote

It’s almost time for the 2009 mtvU Woodie Awards to be handed out, and your vote can help determine who takes home a trophy. The Sixth Annual Woodie Awards Show will air on mtvU, MTV, MTV2 and Palladia on Dec. 4, but you only have until Nov. 16 to cast your vote for artists like Wale and Grizzly Bear in the Breaking Woodie category or for artists including Drake, Kings of Leon and MGMT for the Woodie of the Year.

There’s even a category for the artist who has made the greatest social impact; nominees for the Good Woodie Award include John Legend, Wyclef Jean, Kenna, Jamie Tworkowski, Ra Ra Riot and Alicia Keys. The Woodie Awards are the only awards whose winners are dictated by the college audience. Your vote counts at woodies.mtv.com.

Legacy Records has cut a licensing deal with Phil Spector’s Philles Records, and a reissue campaign has begun. First up is the seasonal album A Christmas Gift for You, with vintage holiday pop songs from artists like Darlene Love and the Ronettes featuring Ronnie Spector, Phil’s wife at the time.

Spector’s famous “Wall of Sound” recording technique was responsible for placing 18 Philles releases on the Top 40 charts and Legacy intends to eventually reissue them all, including albums and singles on vinyl.

Mission of Burma Ready to Party

The new Mission of Burma album The Sound The Speed The Light starts off with a roaring anthem called “1, 2, 3, Partyy!” and overall the effort seems to find the boys in a cheery mood.

Singer/guitarist Roger Miller explains it this way: “Suffice it to say that some of these songs are more of a riot than others; others more somber. All feature hitables and electric instruments like guitars and whatnot. The style seems to be ‘rock.’ File under ‘Vocal Group with Instrumental.’”

If that’s not perfectly clear to you, just go and hear for yourself when Mission of Burma plays the Echoplex Nov. 15.

Vedera: Out of “The Hills,” Into the Fonda

If you’re a regular viewer of MTV’s “The Hills,” you probably saw up-and-coming group Vedera play a couple of songs on the show in early October. The appearance was to promote the Kansas City-based band’s new Epic album Stages, and singer Kristen May says that stages of life inspired the new songs.

“Stages represents our blood, sweat and tears over the past five years as a band on the road,” says May. “It’s about our relationships to one another and the changes we’ve gone through.”

Unlike many musicians who leave their significant others at home while on tour, May is married to Vedera’s guitarist Brian Little. Vedera wraps up their fall tour with a stop at the Henry Fonda Theater Nov. 10.

Canadian folk-rockers Great Big Sea are platinum-selling artists in their homeland, and in an effort to win more American fans, the band took it upon themselves this year to start their own label and give their music better distribution in the United States. Road Rage, Great Big Sea and Fortune’s Favour are now widely available at retail or find them at the merch table when the band plays the El Rey Nov. 12.