A Lost Duck and A Stalled King 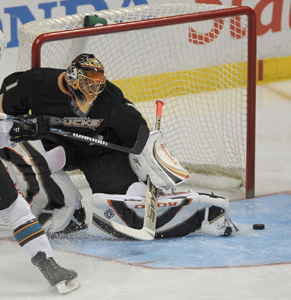 The Los Angeles Kings have taken their fans on quite a rollercoaster ride en route to posting an 8-4-2 record in the first 14 games of the season, what with two four-game winning streaks, one three-game winless spell and, now, consecutive shootout losses.

Entering last week’s games with a 6-2 victory over Columbus, the Kings suffered shootout losses in back-to-back games against San Jose and Vancouver, with both games featuring solid defense but a quiet offense for Los Angeles. Despite allowing just two regulation goals last week, the Kings struggled to find the back of the goal themselves, with Scott Parse and Alexander Frolov scoring lone goals for Los Angeles against Vancouver and San Jose, respectively.

Holding a 1-0 lead in both games, the team’s failure to preserve a victory in each contest dropped the Kings from first to third in the Pacific Division standings, with San Jose (21 points) and Phoenix (18 points) now in the top two slots.

Meanwhile, the Anaheim Ducks hope they can pass anyone in the standings sometime soon, as the team from OC is uncomfortably establishing residence in the Pacific Division cellar. In fact, with the Ducks (4-6-2, 10 points) losing six of eight games since Oct. 10, including a 3-2 shootout loss at Phoenix on Halloween, Anaheim now sports the worst record in the Western Conference. (Only Toronto, Carolina and Florida – all Eastern Conference squads – have worse records than Anaheim.)

During the eight-game skid, Anaheim has been outscored 31-21, with the goalie tandem of Jonas Hiller and Jean-Sébastien Giguère allowing at least four goals in four contests. On the bright side, the Ducks showed some signs of life with a 7-2 victory over Vancouver on Friday. Still, the schedule does not get any easier for Anaheim, with powerhouses such as Pittsburgh, Detroit and San Jose taking on the Ducks in the next three weeks.