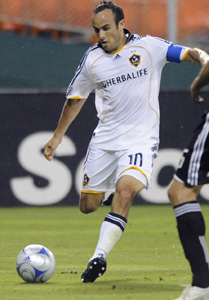 Both the Galaxy and Chivas USA met yet again in the SuperClásico, but this time it was in the first leg of their playoff series. The 2-2 draw only helped the Galaxy, who will host the second match of the series after acting as visitors in the first one.

Chivas USA netted a score in the fourth minute of play when forward Maicon Santos fired a low, left-footed shot past goalkeeper Donovan Ricketts for the early 1-0 edge. However, the resilient Galaxy kept their composure and fired back 10 minutes after when forward Mike Magee connected on a rebounded ball off a defensive mishap. Forward Landon Donovan added another goal three minutes before halftime to hand the Galaxy a 2-1 advantage for the following nine minutes.

Coming off an injury, Chivas USA striker Maykel Galindo recorded perhaps the most prominent goal in his career. Galindo placed the ball into the back of the net after a Galaxy defensive error in the 51st minute of play.

Other than all four scores, the match proved to be a heated one. Fans against opponent fans, players physically and verbally attacking each other and both head coaches even got into it a bit in the first half with an exchange of words.

The second leg of the playoff series is a home contest for the Galaxy at the Home Depot Center. Kickoff is scheduled for Sunday at 4:30 p.m.